The femur is the largest bone in the human body. It is commonly known as the thigh bone (femur is Latin for thigh) and reaches from the hip to the knee. A human male adult femur is about 19 inches long and weighs a little more than 10 ounces.

The femur is extremely hard and not easy to break. Internal bleeding from a broken femur can be significant, which makes this one of the few simple fractures that can be considered life-threatening.

The femur is found in the thigh. It is the largest bone in the body and is the only bone in the upper leg. The femur is known as a long bone. (There are four types of bone: long bones, short bones, flat bones, and irregular bones.) Long bones are longer than they are wide, with spongy bones at both ends and a cavity filled with bone marrow in the shaft.

The femur of an adult male is about 19 inches long and a bit under an inch in diameter. The proximal end of the femur (the part closest to the heart) is the head of the femur.

The head of the femur is a ball that makes up part of the hip joint. It allows the leg to move at all angles.

The femur provides the ability for articulation and leverage for the leg. Articulation allows for standing, walking, and running.

The femur is the primary bone of the leg and all other leg bones are attached to the distal portion of the femur.

The medullary cavity contains red bone marrow, which is involved in the production of red blood cells. Over time, red bone marrow is replaced by yellow bone marrow, which helps to store fat. Blood flow in the femur is hard to measure. It is a significant amount, so much so that a needle inserted into the spongy bone can be used to infuse enough fluid into the bloodstream to offset shock or dehydration. 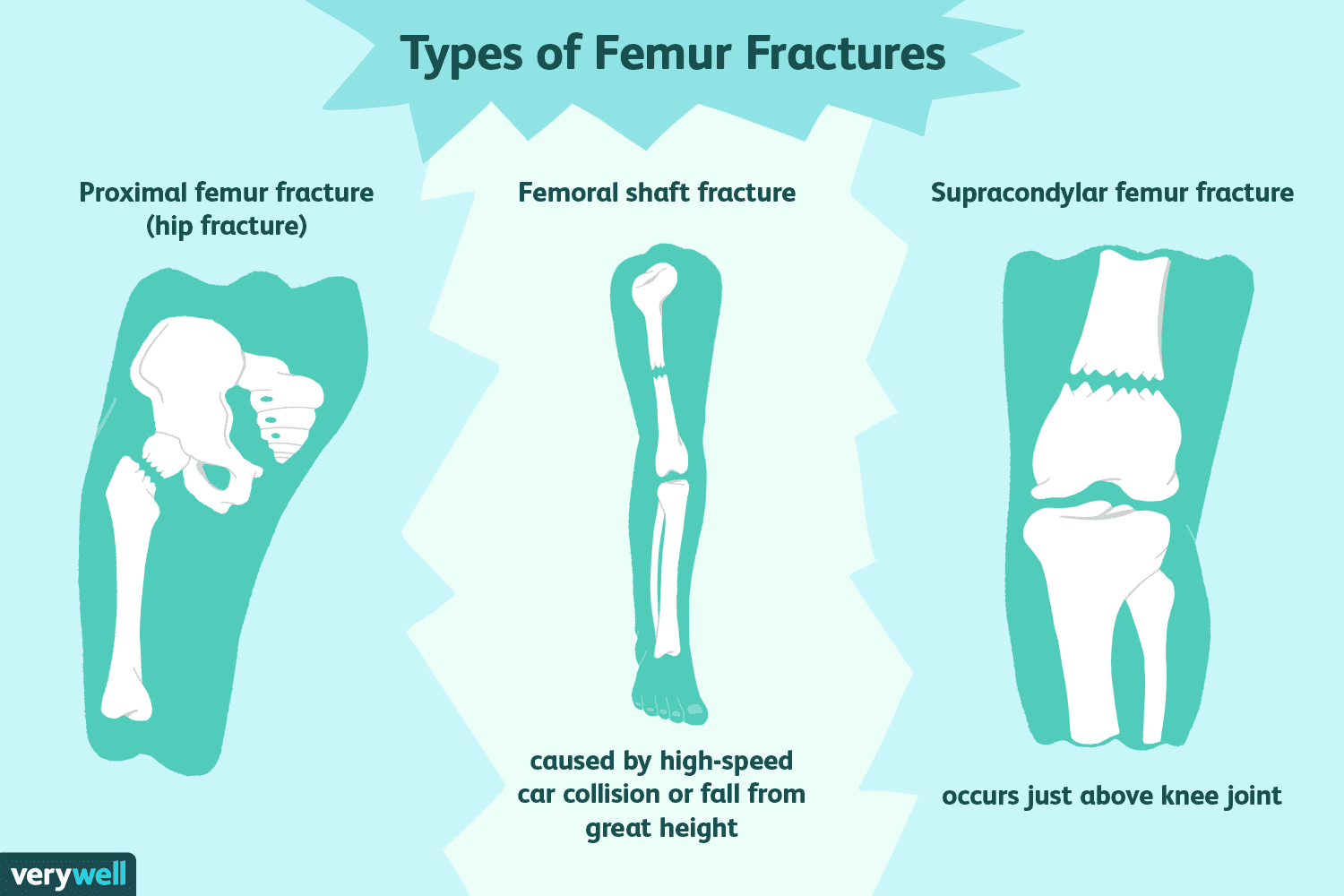 Fractures are the most common condition of the femur. It takes a lot of force to break a femur, although certain areas of the femur are more susceptible. The neck of the femur is the most vulnerable to fracture. Loss of bone density with age leads to an increased chance of fractures in the elderly.

Femoral anteversion is a twisting of the femurs that appears in childhood. Experts believe this condition could affect as many as 10% of all children. In most cases, the condition corrects itself through adolescence without the need for corrective surgery.

Bursitis can affect any joint in the body, including the hip and knee. A bursa is a small sack of fluid that helps with movement in joints.

Femur fractures generally require surgical repair followed by several weeks of rehabilitation and physical therapy. Dislocations of the hip could require surgery depending on how severe the dislocation is. Physical therapy is almost always required. 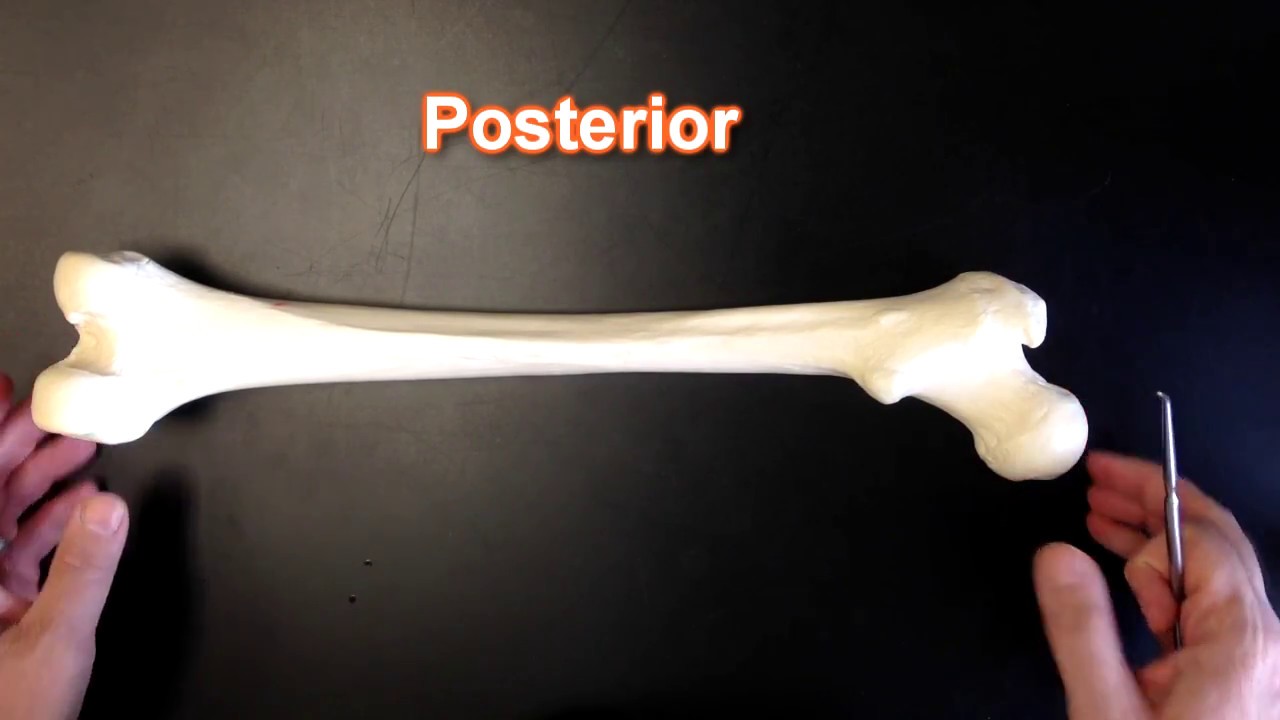 Dr. Ebraheim’s educational animated video describes Supracondylar fracture of the distal femur.
Follow me on twitter:
https://twitter.com/!/DrEbraheim_UTMC
Supracondylar femur fractures can occur in young patients due to high energy trauma and when it occurs in older patients; it usually occurs due to low energy trauma such as a fall (osteoporotic bone). When you see a supracondylar fracture of the distal femur involving the joint, you need to achieve anatomic reduction of the joint, provide stable fixation for the fracture, and achieve the proper length, alignment, and rotation. We hope that the stable fixation will allow the patient to have early range of motion and this will help in cartilage repair. Supracondylar fracture of the femur is a complicated injury. The distal femur is usually shattered and the joint can be involved. The patient may have poor bone quality. There may be prosthesis or a previous fracture that may complicate management of this fracture. The fracture can be open in about 5%10% of the patients and there is an increased incidence of nonunion and malunion with these fractures. Sometimes there will be a vascular injury. The patient may have decreased pulses compared to the other side. You should get the ankle brachial index (ABI) for the injured side. You may want to get CTA or arteriogram. In this situation, you may want to use an external fixator initially. From the joint to the metaphyseal/diaphyseal area is about 15 cm. The distal femur is trapezoidal in shape. The posterior portion is wider than the anterior portion. The medial aspect of the trochlear groove is lower. The medial side shows a 25 degree decrease in width from posterior to anterior. Hardware inserted from the lateral side may penetrate into the joint. Try to direct the screws away from the joint to avoid joint penetration. When placing screws across the condyles, the xray may appear as if the screws are within the bone, however the screws may be long and protruding medially, causing occult postoperative irritation and pain. The screw should end 1 cm short of the projected medial cortex. An internal rotation view of the distal femur will help you to see the prominent and long screws. The posterior half of both condyles lies posterior to the femoral shaft so the lateral axis of the femur is anterior. Coronal fracture of the posterior lateral condyle of the femur that could be missed. Suspect Hoffa fracture in comminuted fractures. You may see double density on an AP view. The fracture line can be seen on the lateral or the oblique view. CT scan will definitely show the fracture. This fracture may require different and separate fixation than the supracondylar plate fixation. The gastrocnemius muscle pulls the distal fracture fragment into recurvatum (extension). The hamstrings and the quadriceps cause shortening of the fracture. Nonoperative treatment is rare. It is used for nondisplaced fractures in patient with comorbidities and for nonambulatory patients. Surgery will probably require preoperative planning. You may want to sue a plate or a rod in this situation (external fixator is rarely used). Retrograde femoral nailing is a minimally invasive surgical approach. It is ideal for ipsilateral femoral neck and shaft fractures when two devices are used. The rod should be inserted proximally to the level of the lesser trochanter. It is important to select proper location for insertion of the rod. The starting point is the center and intercondylar notch just superior to the Blumensaat’s line. You should check proper depth to avoid prominence in the joint, check the distal screws (may be long with medial prominence), and you may need internal rotation view for the diagnosis. Plating of the distal femur can be approached laterally, anterolaterally, or medially. In the lateral approach, the surgical approach is usually done laterally and minimally invasive. In the anterolateral approach, this will allow you to see the joint and reduce the intraarticular fracture under direct vision. The joint fragments must be reduced anatomically and the fixation has to be stable. In the medial approach, you may use antiglide plate for medial condylar fracture of the distal femur. Fracture distal femur after total knee replacement (periprosthetic fracture) can be treated surgically. If the prosthesis is stable, then you will do fixation. You should do fixation with a plate or a rod (short rod or long rod) if the rod can be done through the femoral component or if the prosthesis is not stable then you will do revision of the prosthesis. The whole idea is limited incisions with exposure of the joint if necessary and no soft tissue stripping. The plating is usually done percutaneous or submuscular. It is called biological fixation or minimally invasive plate fixation. You will do direct reduction for the intraarticular fracture; however, for the metaphyseal diaphyseal fracture, you will do indirect reduction. 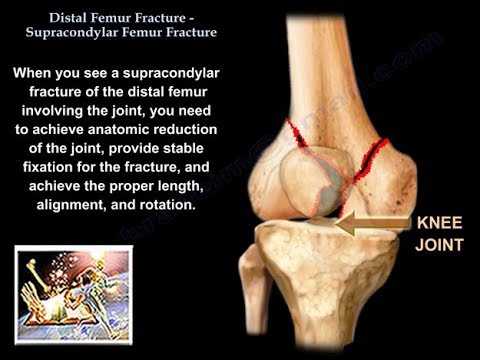 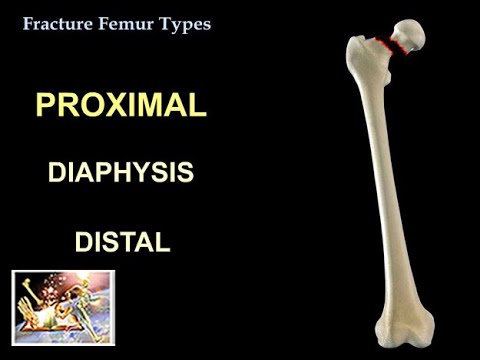 In this lecture anatomical points, general features and special features of femur have been described. 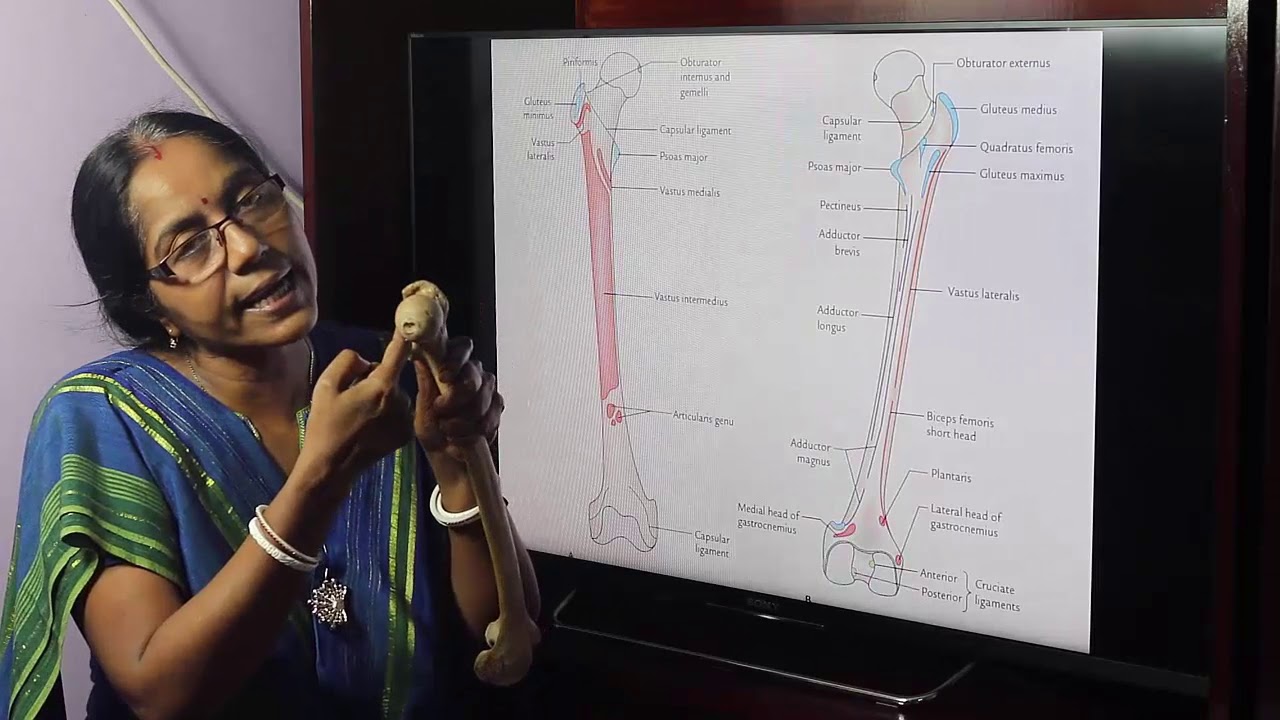 IN THIS VIDEO DETAILED DESCRIPTION OF FEMUR IS GIVEN 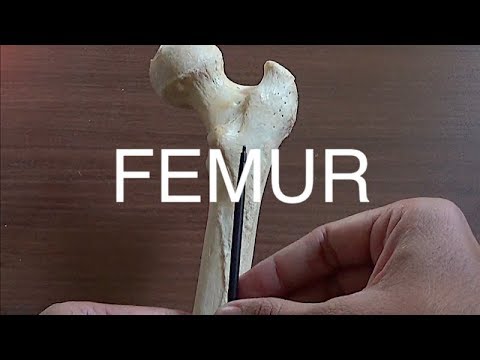