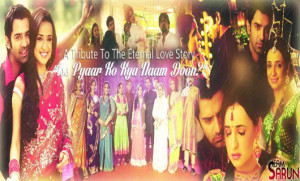 “We don’t meet people by accident. They are meant to cross our path for a reason.”

“You don’t find love, it finds you. It’s got a little bit to do with destiny, fate, and what’s written in the stars.”

“Love is composed of a single soul inhabiting two bodies.”

“Hate will bring two absolutely different people together, love will separate them and a misunderstanding will get them back together again. Finally, love will triumph over everything else.” Vincent Franklin

Iss Pyaar Ko Kya Naam Doon, a memorable and unforgettable story of eternal love and romance. The show premiered on 6th June 2011, airing on Star Plus on the 8pm weekday time slot. The story was based around the two lead protagonists, Arnav Singh Raizada and Khushi Kumari Gupta Singh Raizada (played by Barun Sobti and Sanaya Irani respectively). An intense love hate relationship between two individuals with different backgrounds and beliefs who ultimately fall in love and who cannot live without each other.

A finite web series of eight episodes called ‘Iss Pyaar Ko Kya Naam Doon Ek Jashn’ aired on Hotstar in 2015. The short series was a celebration of Arnav and Khushi’s 3rd Wedding Anniversary. The series was a nostalgic walk down memory lane while at the same time creating new beautiful memories. The online series was declared a super hit and further episodes are expected in the future. “The show has done phenomenally well for Hotstar.” IndianTelevision

Both the show and the web series were extremely popular, gaining immense success both in India and internationally. The show’s success continues today, whether it be re-runs, dubbed versions of the show or remakes of the show in several countries and languages; hence keeping the magic alive. The memorable journey of Arnav and Khushi will remain in the hearts of viewers for eternity. Even today, the fans of the show continue to demand another show with the beautiful evergreen Jodi Barun Sobti and Sanaya Irani.

“On screen their ability to create magic moments is unmatched. Their amazing chemistry literally burns the screens whenever they share a frame together.” Times of India.

Most of the credit for the success of the show goes directly to the lead pair, Barun Sobti and Sanaya Irani; they essayed the roles of Arnav and Khushi to perfection. On screen it was their natural acting, their comfort level, their mind blowing chemistry, and great screen presence which got the viewers hooked. Off screen it is their humble and down to earth personalities, their friendship, their masti and sizzling chemistry which has got them fans for life. This was very much evident at Star Parivaar Live UK. The event gained phenomenal success and all credit goes to Barun and Sanaya. Undeniably Sarun are the ‘King and Queen of Indian Television’ and the best Jodi Indian Television has ever seen.

A special mention to the cast and crew of Iss Pyaar Ko Kya Naam Doon who also contributed to the success of the show. The cast members are some of the most down to earth and modest people that you will ever come across. It is no wonder that the cast of the show were such a close knit family.

Khushi is a simple and traditional girl from Lucknow deeply rooted in family values. She believes in the strength of love, relationships, and faith in God. Arnav is a rich, arrogant and suave business tycoon with no belief in love or God. His closest emotional bond is with his sister Anjali. Arnav and Kushi are annoyed by each other instantly but find they are more similar than they might suspect. Khushi starts working at Arnav’s office and his workers. Lavanya (Arnav’s girlfriend) started mocking Khushi and her clothes along with her friends. Lavanya and Arnav are in a relationship and Arnav’s family is happy with their relationship except his grandmother. A traditional lady who believes in all the value of a marriage, his grandmother (nani) does not understand the concept of a live-in relationship or dating and sets a condition that she will only accept Lavanya if and only if she learns all the traditions of an Indian girl. Anjali hires Khushi to help Lavanya become a good daughter-in-law. Lavanya initially hates Khushi giving her a special name called “Chamkili” (Glittery) due to her clothes; however, Khushi’s kindness and selflessness helps them bond especially when she takes the blame for Lavanya. Lavanya starts learning the values of a good daughter-in-law from Khushi and tries her best to become one. As time passes, Lavanya improves and Nani gets impressed with her. Meanwhile, Khushi and Arnav get closer. Living under the same roof, bumping into each other, talking, smiling, eventually all of this lead to Khushi and Arnav realizing that they love each other but are too stubborn to accept. Instead, Arnav starts hurting Khushi’s feelings in many ways to see her reaction. He even announces his engagement with Lavanya after he and Khushi share a romantic moment (an almost kiss). However, Lavanya soon realizes that Arnav loves Khushi and leaves him to settle in London.

Shyam, Anjali’s husband and a lawyer by profession, meets and falls in love with Khushi. While Shyam pretends to be a loving husband and an honourable man, he secretly lusts for Khushi and remains with Anjali only for her wealth. Due to circumstances involving her adoptive father’s health, Khushi and Shyam become engaged. However, on discovering his married state, Khushi breaks off the engagement and warns Shyam that he must mend his ways.

Arnav decides to tell Khushi that he loves her. However, things change when Arnav accidentally sees Khushi and Shyam together and thinks that they have an affair. Shyam then misleads Arnav, claiming that Khushi and he are in love with each other, and only Anjali is their barrier. Believing Shyam and to save Anjali’s marriage, (as Anjali was pregnant) Arnav forces Khushi to marry him by threatening to destroy Payal’s (Khushi’s elder sister) marriage with Askash (Arnav’s cousin). Their marriage is a contract for six months. In spite of their unwilling relationship, Khushi and Arnav get past their differences and Arnav realizes that Shyam is responsible for their troubles when Khushi risks her life to save Arnav from Shyam’s kidnappers. Khushi and Arnav then openly accept their feelings towards each other. Arnav kicks Shyam out of the house, which makes Anjali misunderstand Arnav, which he later clears. During Godh-Barai, Anjali gets an electric shock as per Shyam’s plan of miscarriage to get into the house again, which he does due to Anjali’s bad condition. Meanwhile some misunderstanding takes place between Akash and Payal.

Arnav’s paternal grandmother then enters, and after troubling Khushi a lot, reveals the truth of Khushi’s adoptive mother Garima as she was the reason behind Arnav’s father and mother death. Arnav still remarries Khushi formally with all the rituals, in spite of opposition from his paternal grandmother, and decides to forget the past and move on. After proving to Anjali that Shyam was responsible for her miscarriage, Arnav kicks Shyam out of his home for the last time.

Just when the marriage seems to be back to normal, Sheetal (Arnav’s friend) brings a son – Aarav, who is a carbon copy of Arnav. Khushi begins to suspect he might be Arnav’s son. Later it is revealed Sheetal was a gold digger who brought in Aarav and trained him to be like Arnav only to gain access to Arnav’s immense wealth, and that she had promised Aarav she’d lead him to his parents if he did so. Khushi and Arnav kick Sheetal out of their lives and legally adopt Aarav from his orphanage.

Finally Khushi wins Mrs. India crown with Arnav by her side and they live a happy life together with their adopted son, Aarav and their Raizada family.

Three years later, Arnav forgets his wedding anniversary and Khushi sends him a video message where she scolds him for forgetting. Then Arnav reminisces the romantic and tragic moments spent with Khushi. On the other hand Khushi is hiding from Arnav. Arnav plans a romantic surprise for Khushi. Finally Arnav meets Khushi; who has been in the house all along. Arnav apologises to her and Khushi forgives him with a hug. Arshi then celebrate their wedding anniversary with gifts, cake, sweet love confessions, warm hugs, tender kisses, a romantic dance and Rabba Ve. 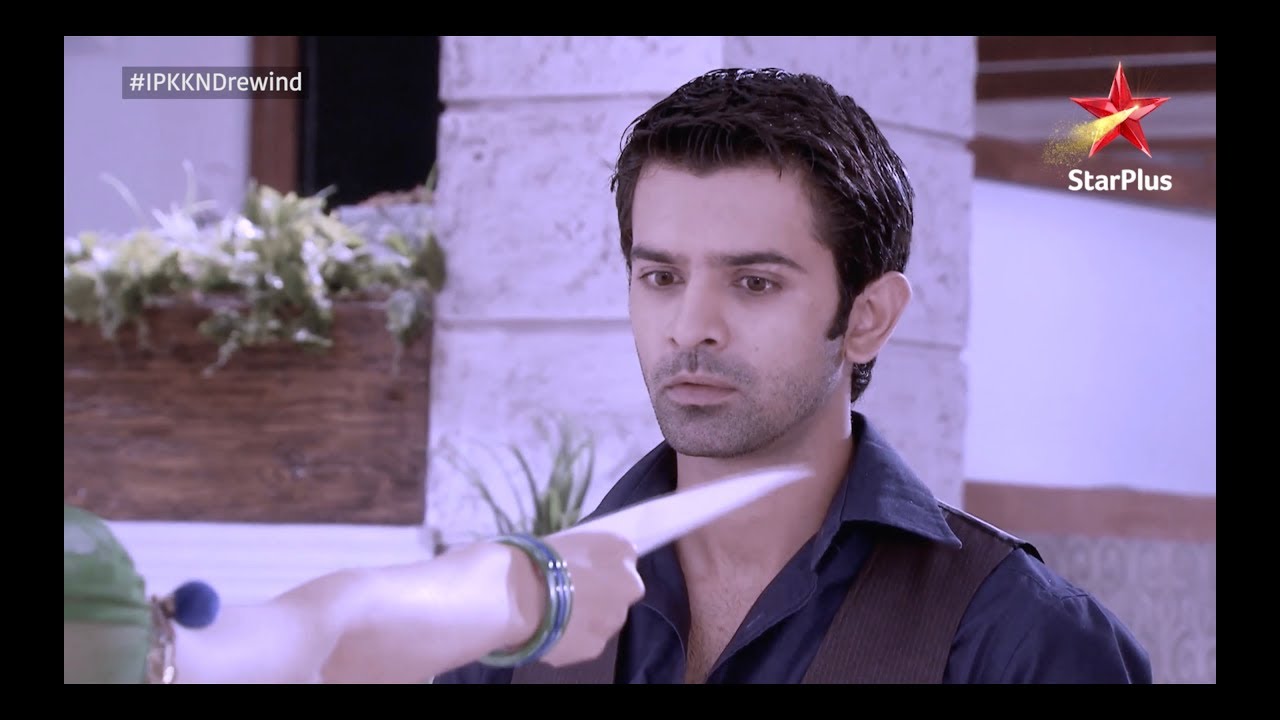 Vashisht family’s financial condition has compelled Chandni to marry Pratham. But will Advay let that happen? Find out on Iss Pyaar Ko Kya Naam Doon, MonFri at 8pm, Only on STAR PLUS. 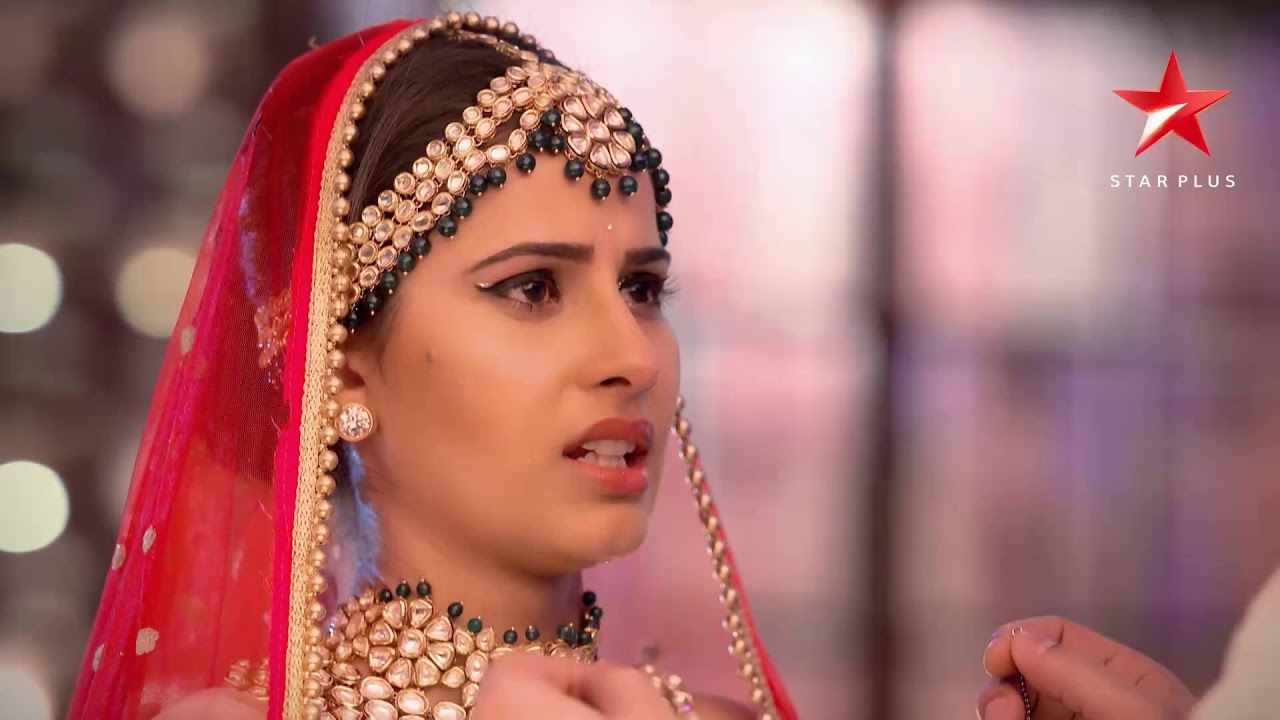