Thanks to AMD Big Navi, Team Red is all geared up to take on Nvidia and it’s RTX graphics cards. GPUs like the RTX 3080, RTX 3090, and RTX 3070 has taken the gaming world by storm with all that power at more affordable price points (in Nvidia standards, that is). Luckily, AMD has gone on the offensive and finally made a comeback in the high-end GPU market.

With the RDNA 2 graphics architecture behind the Xbox Series X and PlayStation 5, Big Navi has certainly met expectations with offerings like the Radeon RX 6800 XT, Radeon RX 6800 and the mighty Radeon RX 6900 XT. Out now and unveiled in all its full glory, it’s giving AMD fans a reason to upgrade and non-AMD fans a reason to switch. Even the more affordable AMD Radeon RX 6700 XT have proven to be excellent propositions despite their slightly higher price of entry.

That isn’t to say that AMD is now only focusing on the high-end market with its Big Navi cards. There are mid-range options in the series as well. So, whether you’re looking for a big-budget purchase in the GPU market or need something more affordably priced, there’s certainly something for you in the AMD Big Navi series.

Cut to the chase

It seems like AMD Big Navi release date rumors have been everywhere since the very beginning of time – or at least since Navi rumors first started appearing in late 2018. Initially, we had heard that Big Navi would be launching at Computex – but Computex didn’t even happen.

Days after Nvidia’s announcement of the RTX 3080 however, AMD teased the launch of both its Zen 3 desktop processors and RDNA 2 graphics cards, with the latter expected to come in right before Halloween on October 28 at 12pm EST – just a couple weeks before the November 10 launch of the Xbox Series X that the graphics architecture will be powering.

AMD has traditionally enjoyed a reputation for providing more affordable products than their competition.

Now, since launching its Navi lineup, AMD has put some price pressure on Nvidia’s mid-range offerings, most notably baiting Nvidia into lowering its prices on its Super cards at the last minute. So, we might see something that challenges the RTX 2080 Ti for maybe $200 (£200, AU$300) less than that card’s MSRP, but don’t expect graphics card prices to drop to where they were before Nvidia Turing made everything more expensive.

A big thing for Big Navi is taking on Nvidia’s strongest graphics cards, which requires a lot of muscle, especially for the RX 6900 XT, which is directly targeting the RTX 3090. While we haven’t got our hands on these graphics cards yet, the on-paper specs are incredibly impressive.

Right off the bat, the Radeon RX 6800 XT is looking like it’s going to be the headline graphics card here, even if it’s not quite in the same league as the Radeon RX 6900 XT – it’s also much less expensive. AMD is claiming that this RTX 3080 competitor will be twice as powerful as the AMD Radeon RX 5700 XT.

That first-generation RDNA graphics card is packed with 40 compute units, with 2,560 Stream Processors (SPs), backed with a game frequency of 1,755 MHz. The Radeon RX 6800 XT, on the other hand, is packed with 72 Compute Units, with a game frequency of 2,015MHz. Assuming each RDNA 2 Compute Unit has the same amount of Stream Processors as RDNA, we’re looking at about 4,608 SPs. When that’s combined with the higher power budget and the 50% performance-per-watt goal that AMD claims, it isn’t hard to believe that AMD will actually hit that number.

But do you know what other graphics card is around twice as fast as the RX 5700 XT? The Nvidia GeForce RTX 3080. Even according to the graphs AMD itself provides, the RX 6800 XT and the RTX 3080 are going to be trading blows, with neither card pulling definitively ahead across the board – this may be why Nvidia is rumored to be readying a GeForce RTX 3080 Ti.

What’s perhaps even more interesting, however, is that the Radeon RX 6800 cuts the GPU down to 60 Compute Units, power down by 50W and brings the game clock down by 200MHz. This graphics card looks to be a pretty sizable increase in performance over the RTX 2080 Ti – which is about the same level as the newly-launched RTX 3070. However, the benchmarks shown off here are with Smart Access Memory enabled.

This is a feature that gives your CPU direct access to GPU memory, which takes a lot of latency out of the render pipeline. There’s a catch, though – this feature will be exclusively available with AMD Ryzen 5000 processors on 500-series motherboards (including X570, B550 and A520). When AMD spoke on this feature it suggested that enabling this feature in addition to Rage Mode, which is essentially an AMD-supported overclock, can boost performance up to 13%. So, if you’re using an older AMD processor or even an Intel chip, you could experience much less performance.

With RX 6800 on the shelves, AMD can now allow its fans to enjoy the advantages of ray tracing. However, ray tracing is a wash at 4K. In that same way, the more affordable Radeon RX 6700 XT starts to seriously struggle when you enable ray tracing at 1440p, its target resolution. Still, if you’re after 1440p gaming, the Radeon RX 6700 XT gets the job done as it was able to beat an average 60 fps in all but two of the games in our test suite.

The biggest surprise, however, came at the end of AMD’s presentation, when CEO Lisa Su revealed the Radeon RX 6900 XT. With this GPU, power consumption remains shockingly the same as the Radeon RX 6800 XT, but because it gets bumped up to 80 Compute Units, along with the same 2,015MHz Game Clock, performance gets a pretty massive boost.

At the end of the day, however, it’s important to take all of AMD’s performance claims with a grain of salt. Team Red is trying to sell a product, so it’s going to pick the absolute best-possible results to share. AMD Big Navi performance seems incredible, but we’re going to have to wait until we get these graphics cards in our lab to see just how powerful they actually are.

Until then, we can still sit and revel in the fact that AMD is finally taking Nvidia on at the high end. We can’t stop thinking about the trajectory AMD took with Ryzen starting in 2017, and we certainly hope it takes a similar path with its RDNA graphics cards. The most interesting question is: will Nvidia take AMD’s attacks lying down like Intel has? Or will it hit back with strong innovation and pricing? We’re definitely hoping for the latter, but we’ll settle for the graphics card market being exciting again.

We’ve also included all the publicly available AMD Big Navi specs down below, for your reference:

These Big Navi GPUs will feature “Rage Mode” for one-click overclocking, along with AMD Smart Access Memory, and when paired with an AMD Ryzen 5000 processor, these features are, AMD promises, able to give some serious boosts to game performance. 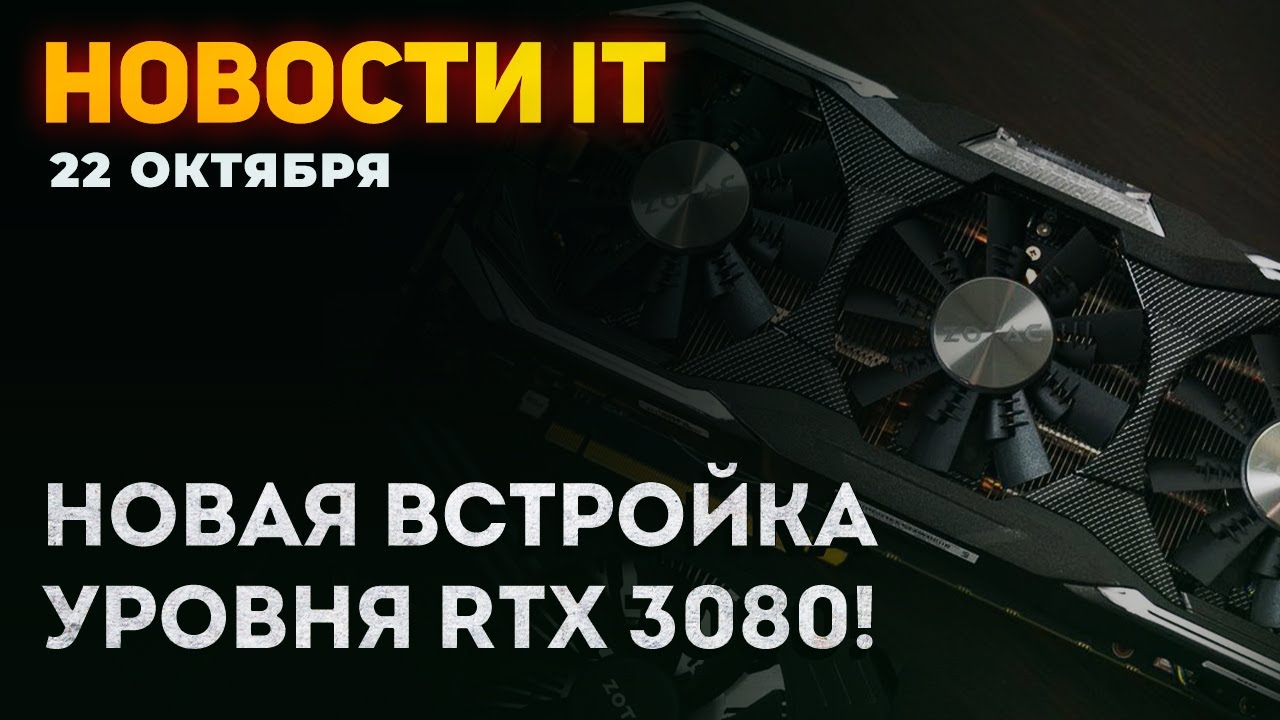 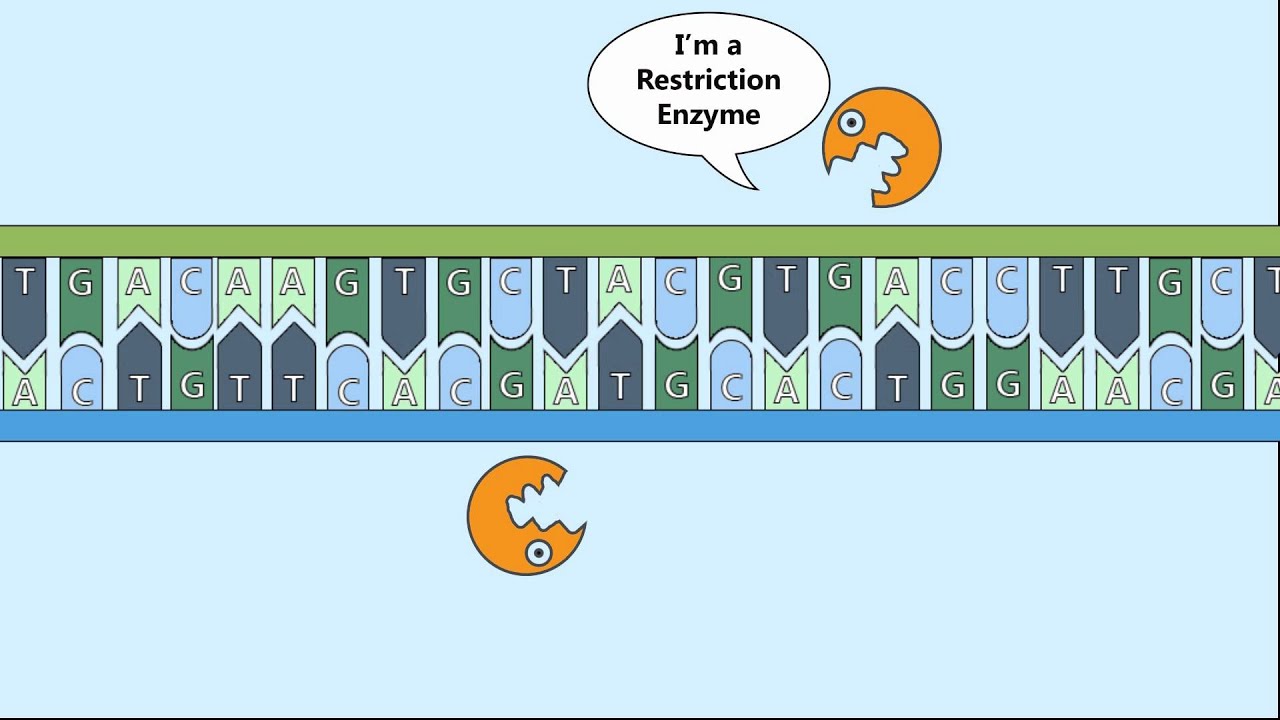 This is one of the Most watched video on rDNA technology on YouTube with your support.
Welcome to www.biologyexams4u.com, Subscribe, Support \u0026 fall in Love with Biology
Please subscribe using the link: https://bit.ly/3kG2kKf
00:00 Introduction
0:10 | Definition of Recombinant DNA technology or rDNA technology
0:43 | Summary of steps in rDNA technology
1:25 | Step 1 identification and isolation of gene of interest
From where we get our gene of interest?
2:15 | Step 2: Insertion of this isolated gene in a suitable vector using restriction enzyme and ligase.
2:26 | What is a gene cloning vector? what is called rDNA molecule?
4:10 | Step 3: Introduction of this vector into a suitable organism/ cell called host (transformation)
Gene transfer methods Physical and chemical gene transfer methods
5:23 | Step 4: Selection of the transformed host cell.
6:35| Step 5: Multiplication or expression of the introduced gene in the host.
Watch Steps Involved in the production of Recombinant Insulin. How Recombinant Insulin is produced? https://youtu.be/rq18lAEjtgI
Thank you so much:)
biologyexams4uvideos Biotechnology StepsrDNAtechnology
Detailed explanation of steps in recombinant DNA technology explained with the example of insulin synthesis in bacterium.
http://www.biologyexams4u.com/2013/10/stepsinrecombinantdnatechnology.html
Biotechnology multiple choice questions and answers
http://www.mcqbiology.com/2012/11/mcqonbiotechnology.html
For More Simple Biotechnology videos
https://www.youtube.com/playlist?list=PLpKNQ2U3np9jx0Gjl66YK6O3nel6A93zr
Biologyexams4u network is one of the leading biology learning network with number of websites providing free biology learning resources to students as well as teachers. We firmly believe that ‘sharing is caring’ and promote free quality education all around the globe. Thank you so much for your consistent support.
Visit our Websites
About Biology Exams, Preparation tips and Notes: https://www.biologyexams4u.com/
MCQ in biology: Wide collection on Multiple Choice in Biology
https://www.mcqbiology.com/
Interactive Biology Quiz
https://www.quizbiology.com/
Difference between reference site primarily focused on biology
https://www.majordifferences.com/
Examples of everything
https://www.examplesof.net/
https://www.facebook.com/biologyexams4u/
https://twitter.com/biologyexams4u?la…
https://www.pinterest.com/biology4u/
Thank you so much 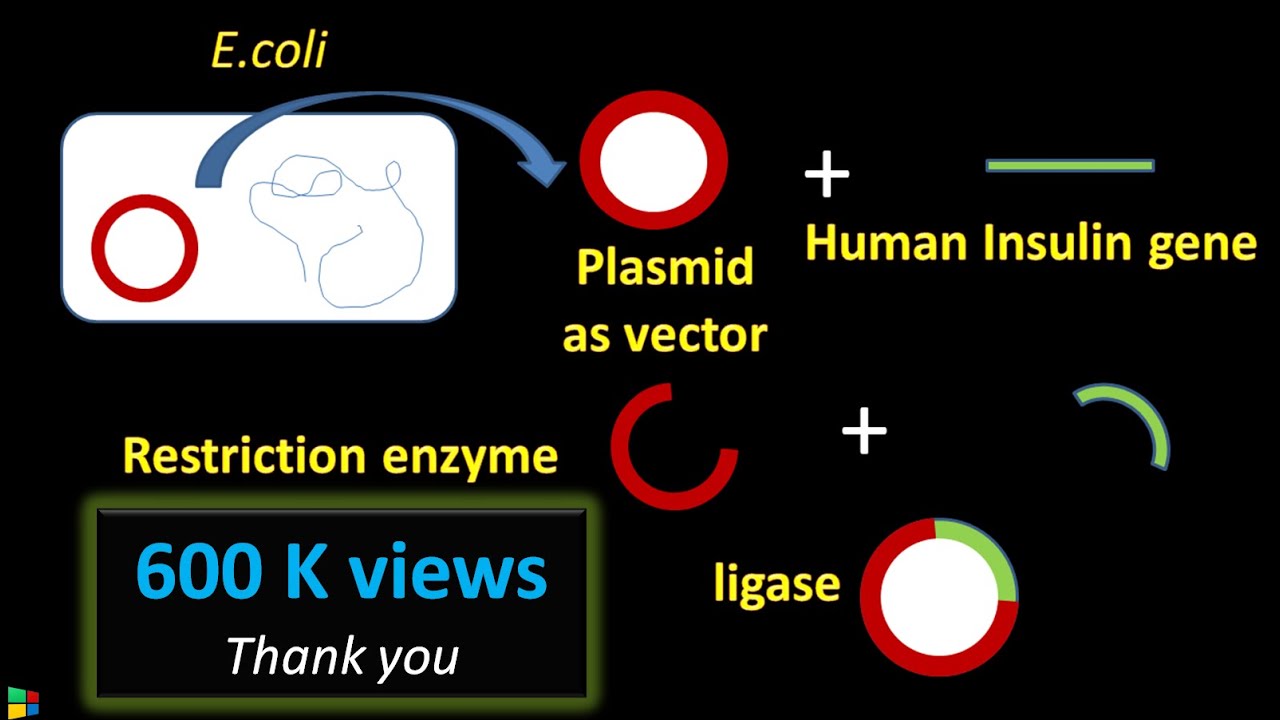 This cloning vector lecture explains about the yeast artificial chromosome. http://shomusbiology.weebly.com/
Download the study materials here
http://shomusbiology.weebly.com/biomaterials.html
Yeast artificial chromosomes (YACs) are genetically engineered chromosomes derived from the DNA of the yeast, Saccharomyces cerevisiae, which is then ligated into a bacterial plasmid. By inserting large fragments of DNA, from 1001000 kb, the inserted sequences can be cloned and physically mapped using a process called chromosome walking. This is the process that was initially used for the Human Genome Project, however due to stability issues, YACs were abandoned for the use of bacterial artificial chromosomes (BACs). Beginning with the initial research of the Rankin et al., Strul et al., and Hsaio et al., the inherently fragile chromosome was stabilized by discovering the necessary autonomous replication sequence (ARS);[1] a refined YAC utilizing this data was described in 1983 by Murray et al.[2] The primary components of a YAC are the ARS, centromere, and telomeres from S. cerevisiae. Additionally, selectable marker genes, such as antibiotic resistance and a visible marker. Without these sequences, the chromosome will not be stable during extracellular replication, and would not be distinguishable from colonies without the vector.[3][4]
Yeast expression vectors, such as YACs, YIps (yeast integrating plasmids), and YEps (yeast episomal plasmids), have an advantage over bacterial artificial chromosomes (BACs) in that they can be used to express eukaryotic proteins that require posttranslational modification.
However, YACs are significantly less stable than BACs, producing \”chimeric effects\”: artifacts where the sequence of the cloned DNA actually corresponds not to a single genomic region but to multiple regions. Chimerism may be due to either coligation of multiple genomic segments into a single YAC, or recombination of two or more YACs transformed in the same host Yeast cell.[7] The incidence of chimerism may be as high as 50%.[8] Other artifacts are deletion of segments from a cloned region, and rearrangement of genomic segments (such as inversion). In all these cases, the sequence as determined from the YAC clone is different from the original, natural sequence, leading to inconsistent results and errors in interpretation if the clone’s information is relied upon. Due to these issues, the Human Genome Project ultimately abandoned the use of YACs and switched to bacterial artificial chromosomes, where the incidence of these artifacts is very low. Source of the article published in description is Wikipedia. I am sharing their material. Copyright by original content developers of Wikipedia.
Link http://en.wikipedia.org/wiki/Main_Page 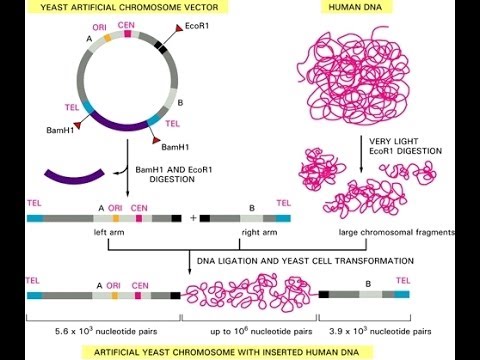 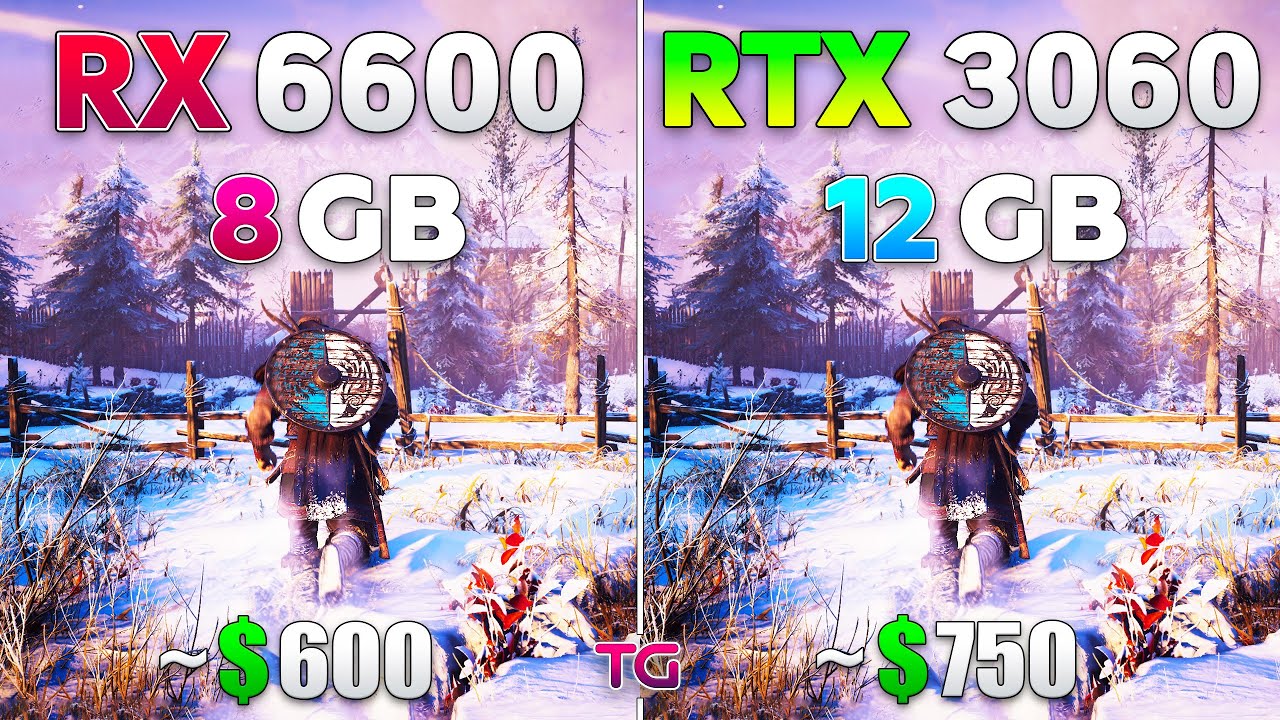