The Origin of Harmonics & Their Effects on a Power System

To understand the topic of this article (THD or Total Harmonic Distortion), we must build up our knowledge from the very basis of an electrical circuit.

A basic electrical circuit is composed of a voltage source and a load, which draws current from the source. This set-up operates with two basic electrical quantities; the current, and the voltage which can be either direct or alternating.

In case of the Direct Current or DC, the current flows only in one direction and has a constant value throughout time. In Alternating Current or AC, the current changes continuously and cyclically with time and reverses polarity after every half cycle. Therefore, the value of AC over time can be plotted as a waveform, most commonly a sine wave.

However, in electronics, we can never achieve a pure sine wave. Every wave has some sort of disturbances that distort its original waveform. These distortions are explained in terms of Total Harmonic Distortion (THD).

A harmonic is a sinusoidal component of a non-sinusoidal wave (e.g. the “real” waveform of an alternating current, at a frequency that is an integer multiple of the fundamental frequency. In other words, they are the components of the resulting wave which causes its non-sinusoidal shape.

The harmonic which has a frequency ’n’ times of the fundamental frequency is called an nth-order harmonic.

Total Harmonic Distortion (THD) is the degree to which a current or voltage waveform is distorted. Mathematically, it is the ratio of the sum of values of all the harmonic components to the value at the fundamental frequency, expressed as a percentage.

How Do Harmonics Alter the Waveform?

Harmonics are sine waves with frequencies which are multiples of the fundamental frequency, which can interact with the original sine wave. Whenever two or more waves interact, they undergo a phenomenon called interference.

When two or more waves interact, they superimpose to form a resultant wave that has either a greater, lower or same amplitude. This phenomenon is called interference.

Consider two identical waves that are completely in-phase with each other.

The magnitude of both waves gets added. Thus, the resulting wave has a greater amplitude than the two individual waves.

The magnitude of both waves gets subtracted. Thus, the resulting wave has a lesser amplitude than the individual waves.

Thus, the result is a distorted non-sinusoidal wave.

Why Are Harmonics Produced?

There are two types of harmonics present in an electrical system; The current harmonics and the voltage harmonics. We will discuss each of them one by one.

The AC current in a power system has a near perfect waveform. The waveform gets affected whenever a load is connected to the system. Generally, there are two types of load; linear loads and non-linear loads.

The loads which draw current in a sinusoidal waveform are called linear loads. Current at any instant is proportional to the applied voltage. e.g. heaters, incandescent lamps, etc.

Power losses in a transformer affect the overall efficiency of the power system. Therefore, their maintenance is of great importance.

Hysteresis Loss: Hysteresis (opens in a new tab) loss is due to constant magnetization and demagnetization of the transformer core. This happens because the AC supply reverses its direction after every half cycle.

As higher-order harmonics have a very high frequency, they increase both the hysteresis and eddy current losses.

Like transformers, motors are also affected by harmonics. The effects of hysteresis and eddy currents on the motor are the same as in the transformer. Both these losses are produced in the iron core of the motor. These losses increase due to the presence of higher-order harmonics.

The interaction between these positive and negative sequence harmonics result in severe vibrations. In some cases, these vibrations may even damage the motor shaft.

In a three-phase power system, the current in each phase is equal in magnitude, but has a 120⁰ phase shift. Ideally, the currents in the three phases add up-to “zero”. This means that the neutral wire will carry no current.

But, due to the presence of harmonics, the current does not add up to zero. Under this condition, the neutral wire will now carry current. This neutral current is highly undesirable in a power system.

Skin effect (opens in a new tab) is a scenario in which the current does not flow through the whole conductor, but only through its outermost portion. Thus, the usable area of the conductor is reduced.

The flux density is directly proportional to the supply frequency. As the higher-order harmonics have a high frequency, flux density also increases. The increase in flux density further reduces the area for current to flow.

IEEE Standard 519-2014 (opens in a new tab) advises on the permissible harmonic distortion limit for electronic equipment. As per the article, computers and allied equipment like programmable controllers typically require AC sources that have no more than a 5% harmonic voltage distortion factor, with the largest single harmonic being no more than 3% of the fundamental voltage.

Harmonics above the permissible limit can cause malfunctioning of the electronic equipment. A higher percentage of harmonic distortion may even burn sensitive components.

Another phenomenon caused by harmonics is voltage notching (opens in a new tab). Voltage notches can also cause malfunctioning of sensitive electronic equipment.

Harmonics in a Portable Inverter Generator

To elaborate on the concept of clean power (as in sinusoidal, not to be confused with green energy), let us compare portable inverter generators and conventional generators in terms of the THD (Total Harmonic Distortion) produced.

The harmonic distortion in conventional generators is generally in the range of 9–10%. For some generators, it can be even higher than that (manufacturers will often say “under 25%”, as it also depends on the load). Due to such high distortion, these generators are not suitable for circuits which contain computers, laptops, TVs and other sensitive electronic equipment. It is worth noting that conventional generators with low THD exist, but are somewhat of an exception.

Harmonics in a power system are caused by non-linear loads and most of the loads these days are non-linear. Therefore, as much as these harmonics are undesired, they will still be present in the power system.

Harmonics are a very technical subject and should only be dealt by an experienced person. Therefore, in case of any trouble, we would highly suggest you consult a professional. 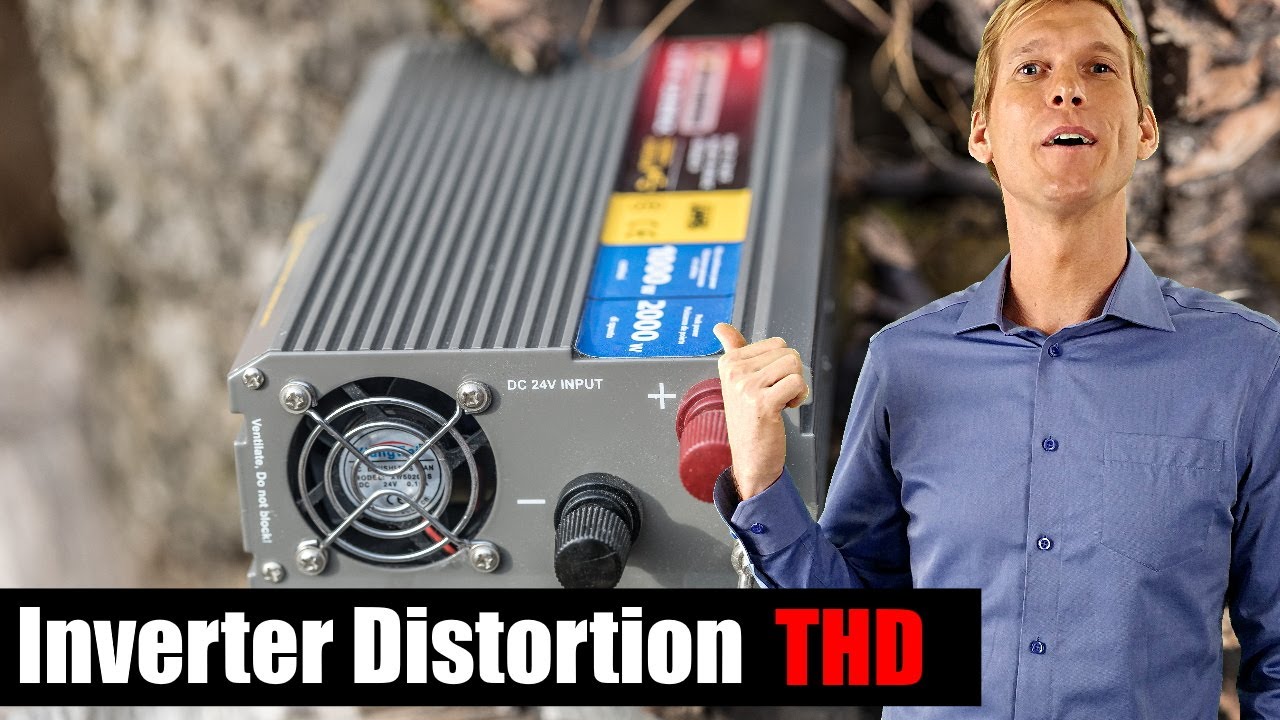 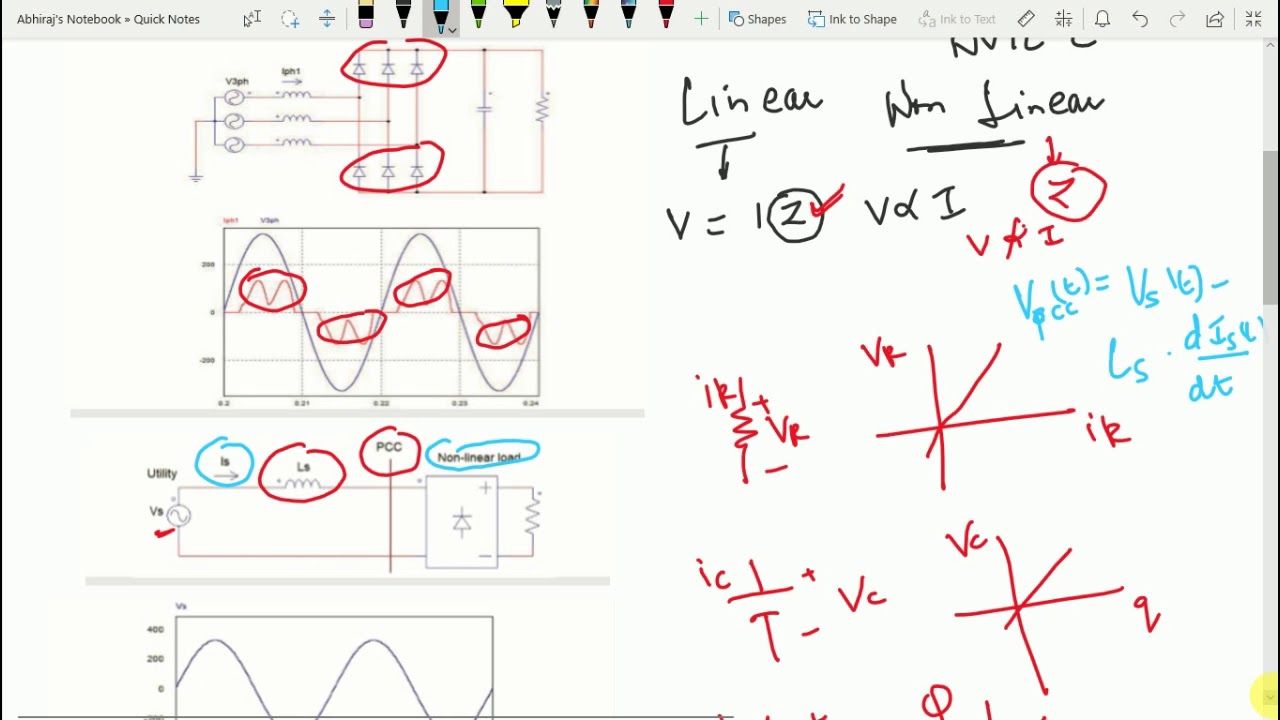 Generator: DON’T Forget To Do THIS or You’ll FRY Your Sensitive Electronics!

It is important to anticipate the approximate load that you plan on putting on your generator in order to make the proper adjustments so that you don’t ruin your electronics especially sensitive ones!
Most electronics that we’re familiar with prefer 120 volts and 60 Hz. Being too far above or below could ruin your electronics and cost you some big bucks!
With a Killawatt meter and a phillips head screwdriver, you can easily make a simple adjustment to dial in your Hz and voltage.
Typically, you’ll want to locate your carburetor and above that is a screw that is threaded through a bent, flat metal piece that has springs and linkages attached to it. This screw controls your generator’s governor and RPMs (and in turn, the Hz).
Turn the screw slowly (quarter or half turns as you go) and you will find that your Hz will adjust as you turn. You can read the changes in real time with a Killawatt meter.
Turn clockwise to increase your Hz, and turn counter clockwise to decrease your Hz.
Make these adjustments under the load that you anticipate using with your generator. When the load is removed, you will find that your Hz and voltage will be slightly higher than 60 and 120 (respectively) when the generator runs at idle.
Once under load though, you’ll be dialed right in to the proper numbers.
You can find a Killawatt meter on Amazon at the link below (affiliate and thank you:) )
https://amzn.to/3hIaxzu 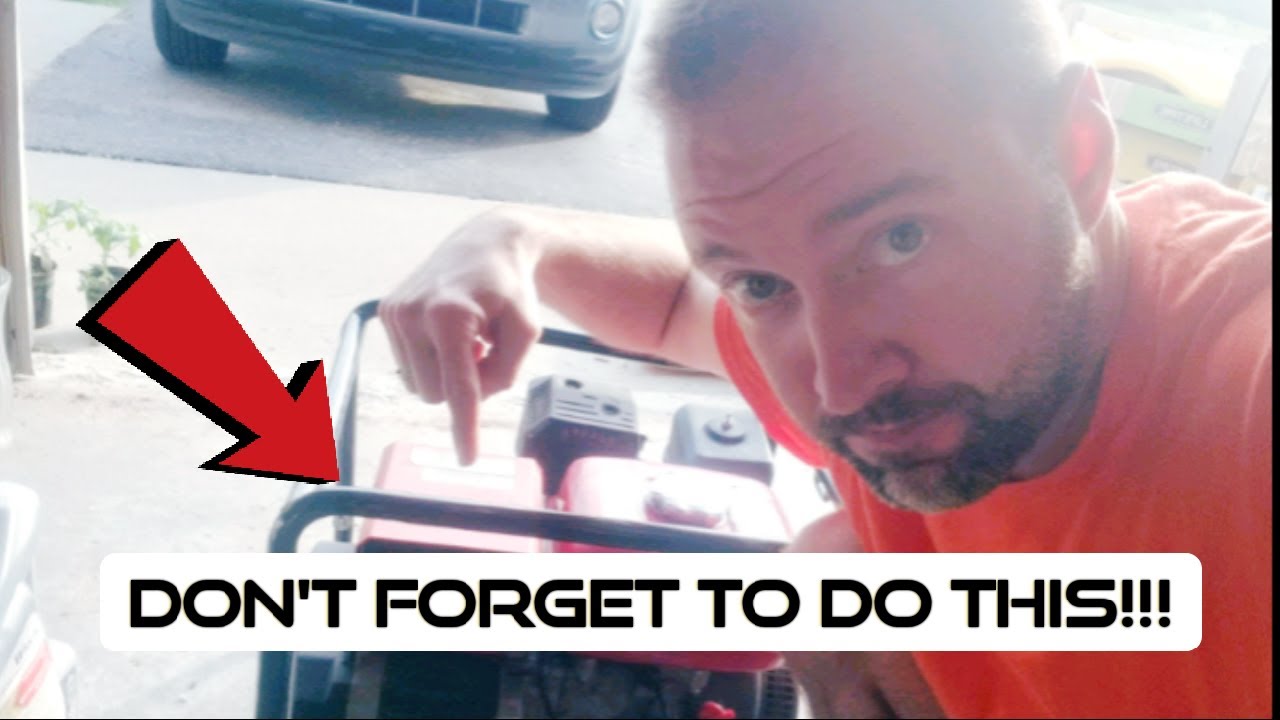 19. Odd vs Even Harmonics

Why do square waves sound so square? Why do saw wave sound like a saw? Here we look at some reasons why.
Support me on Patreon: https://www.patreon.com/composinggloves
Spotify:
spotify:album:6oBFXMK7UXMGCxHUMleY6b
itunes:
itunes.apple.com/us/album/mozarts…rto/id1088687868
Soundcloud https://soundcloud.com/composinggloves
Facebook www.facebook.com/ComposingGloves/
YouTube www.youtube.com/user/composinggloves 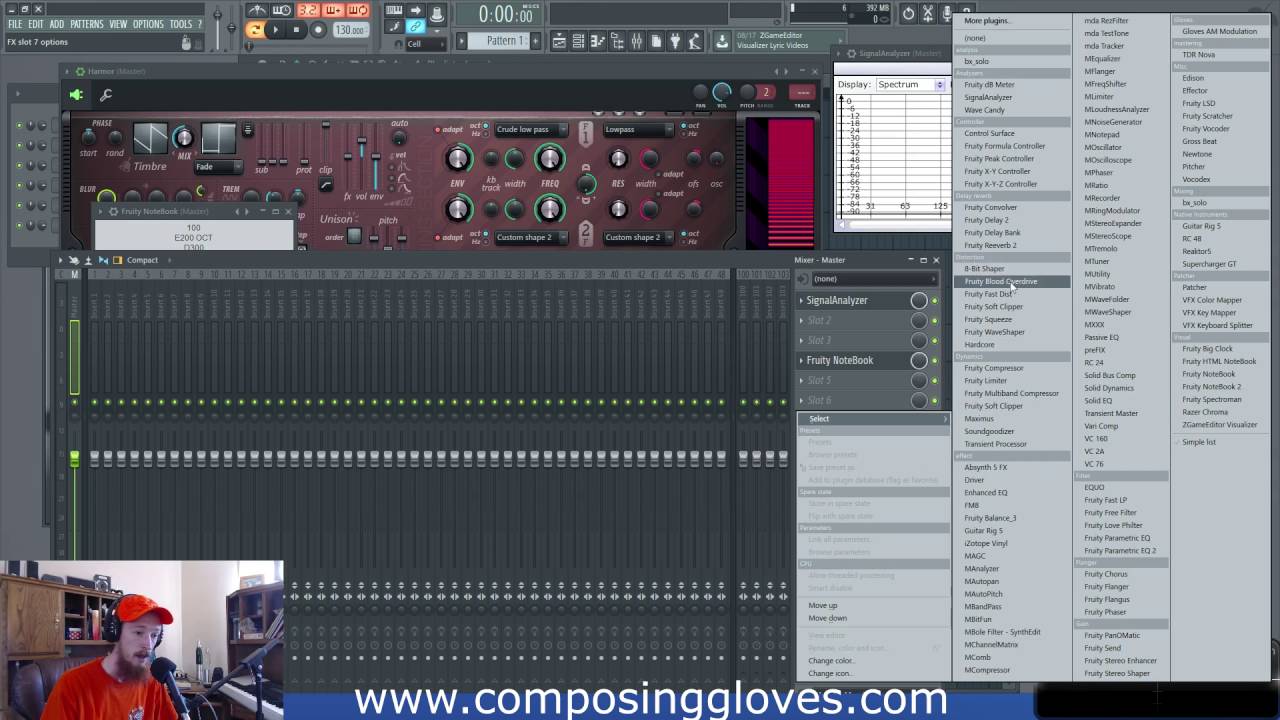 This video shows how to use the FFT function on an oscilloscope to measure the relative amplitude of the harmonic distortion components of a signal, and then take those results and compute the THD, or Total Harmonic Distortion. Actual measurements are shown, and results are validated by a THD calculator in the scope as well as a THD measuring multimeter.
Videos mentioned in this video are:
Audio Compressor project: https://youtu.be/1h0FZJYXQ_w
Demo of above: https://youtu.be/pUii_pDQxg8
Basics of using FFT: https://youtu.be/oRfIpG6XAw
Basics of dB: https://youtu.be/1mulRIEZ80
Notes from this video:
http://www.qsl.net/w2aew/youtube/THD_with_FFT.pdf 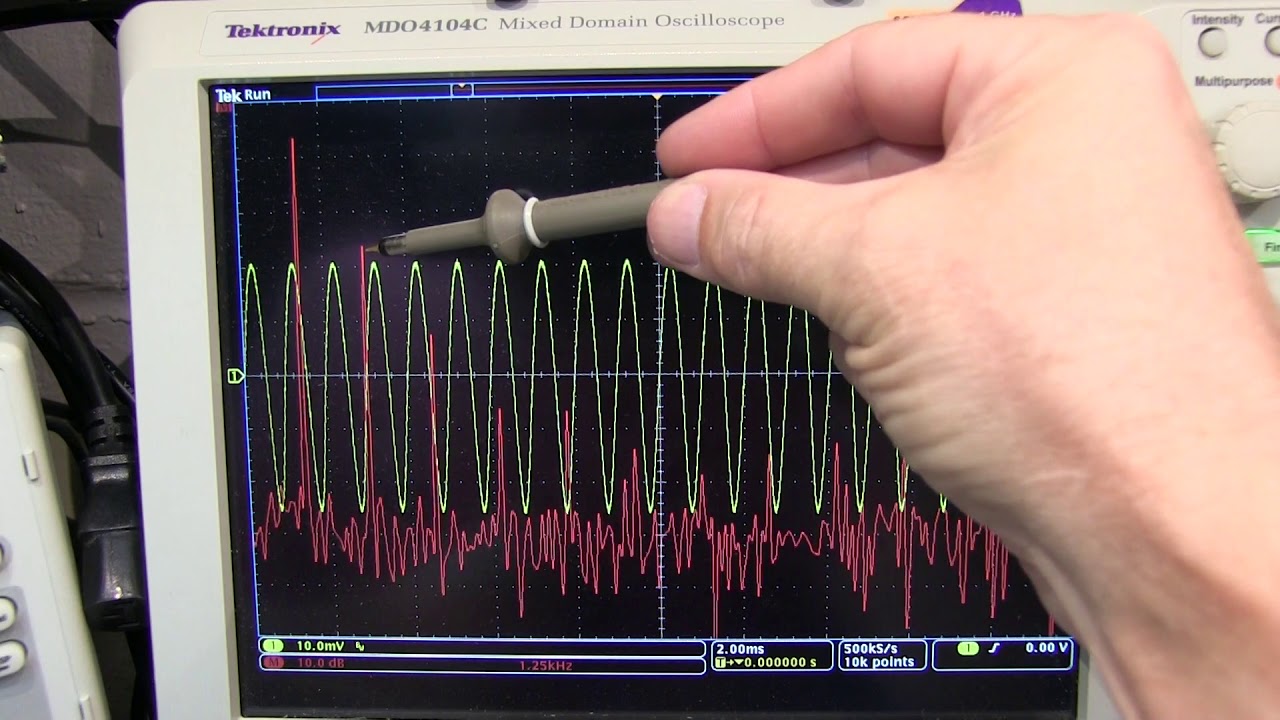