Liev Schreiber had a family day this weekend.

The Ray Donovan actor took his longtime girlfriend, Taylor Neisen, and child Sasha, 14 – whom he shares with ex Naomi Watts – on a bike ride in the Hamptons neighborhood of Long Island in New York.

Also with the family was their dog, who was pulled along by its leash as Liev pedaled away. 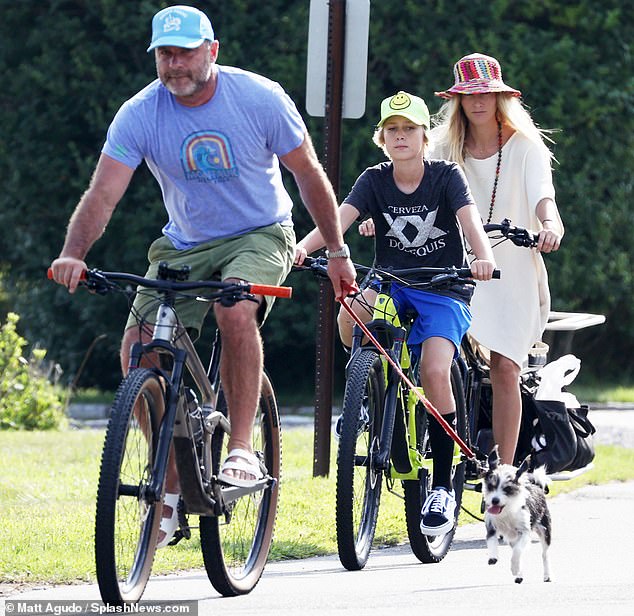 After breakfast bike ride: Liev Schreiber took his longtime girlfriend, Taylor Neisen, his dogs and his kid on a bike ride in the Hamptons after the group had breakfast together

The actor, 53, wore a baby blue hat, green shorts and a lavender t-shirt adorned with a rainbow. He completed the ensemble with a pair of white sandals.

His better half wore white dress and multicolored bucket hat.

His 14-year-old child, Alexander (who goes by Sasha), wore a dark blue Dos Equis t-shirt, a yellow hat with a smiley face in the center and blue athletic shorts.

The group rode together after eating a hearty breakfast. 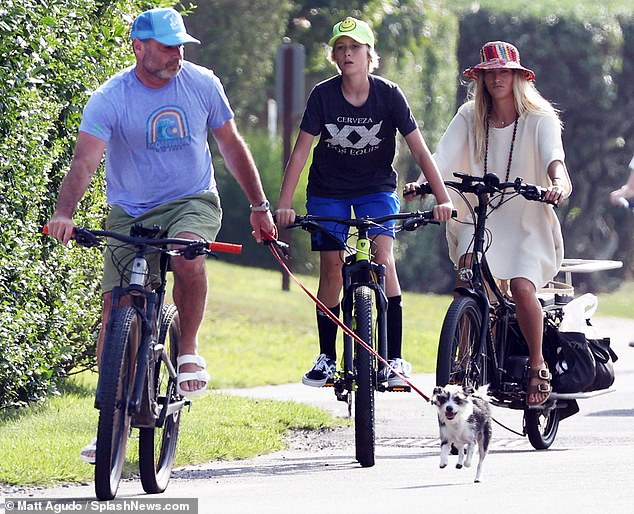 Blending a family: Liev and Taylor have been dating since 2017, and she has often been spotted with her beau and his children, who he shares with Naomi Watts 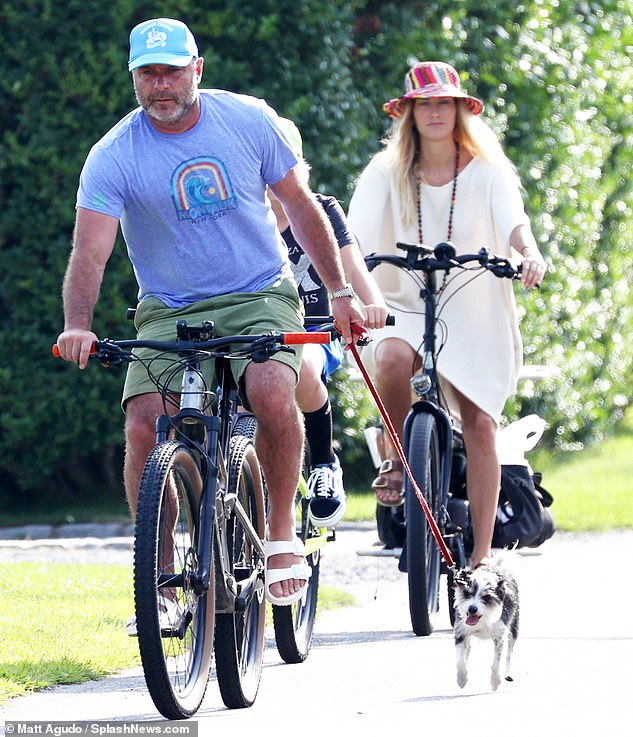 His lady: The actor and the former Miss South Dakota have been dating for years now. The two were first linked in 2017 about a year after Schreiber ended his relationship with his longtime partner, and mother of his children, actress Watts

The actor and the former Miss South Dakota have been dating for years now.

The two were first linked in 2017 about a year after Schreiber ended his relationship with his longtime partner, and mother of his children, actress Watts.

During their partnership, which lasted more than a decade, Schreiber and Watts had two children together. Alexander was born in 2007 and younger child Kai was born in 2008.

During the couple’s split, they released a statement regarding raising children together. 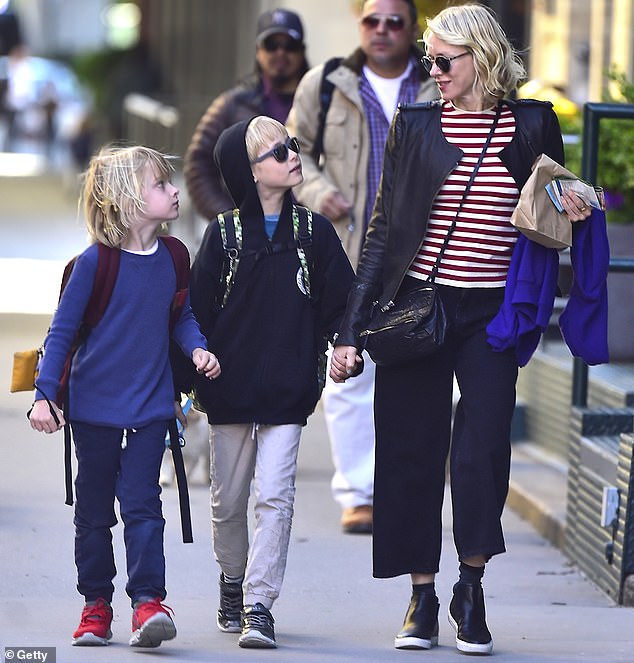 Still raising kids together: Watts, pictured here with her two children in 2016, is still actively raising her children with Schreiber despite their divorce

‘It is with great love, respect, and friendship in our hearts that we look forward to raising our children together and exploring this new phase of our relationship.’

The Isle of Dogs actor and his current flame initially said they were not dating but just friends.

Schreiber has also been busy professionally in recent years as well. While Ray Donovan was cancelled last year, Showtime announced in February that a movie for the show will come out in 2022.

Schreiber also shot Across the River and Into the Trees during late 2020 and early 2021. Schreiber will play the lead role of Colonel Richard Cantwell.

The film revolves around Schreiber’s character seeking inner peace after being wounded physically and mentally in war. It is based on the Ernest Hemingway novel of the same name. 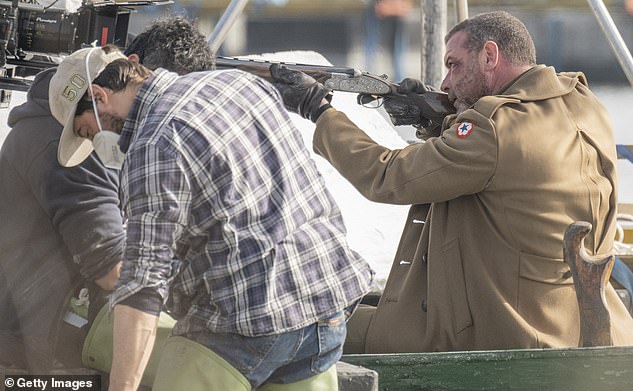 Across the River and Into the Trees: Photographed here on the set of the film, Schreiber will play Colonel Richard Cantwell, a man wounded physically and mentally in war, in the movie based on Ernest Hemingway’s novel of the same name 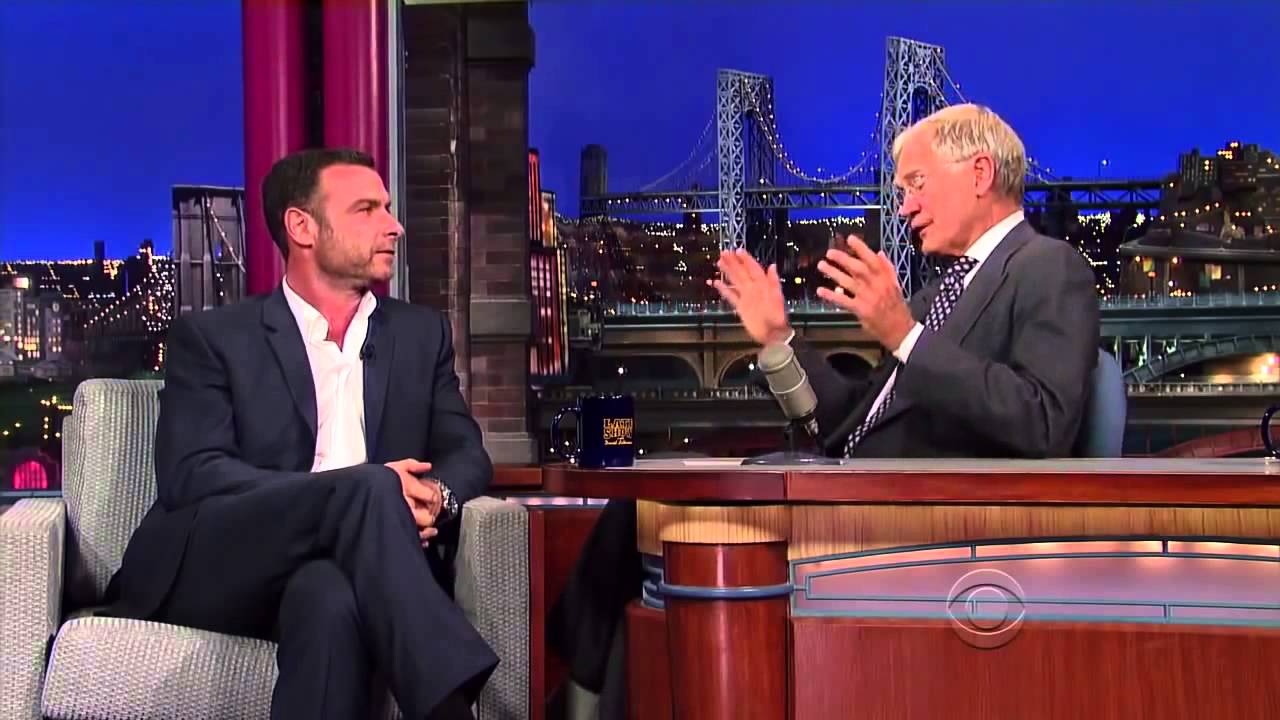 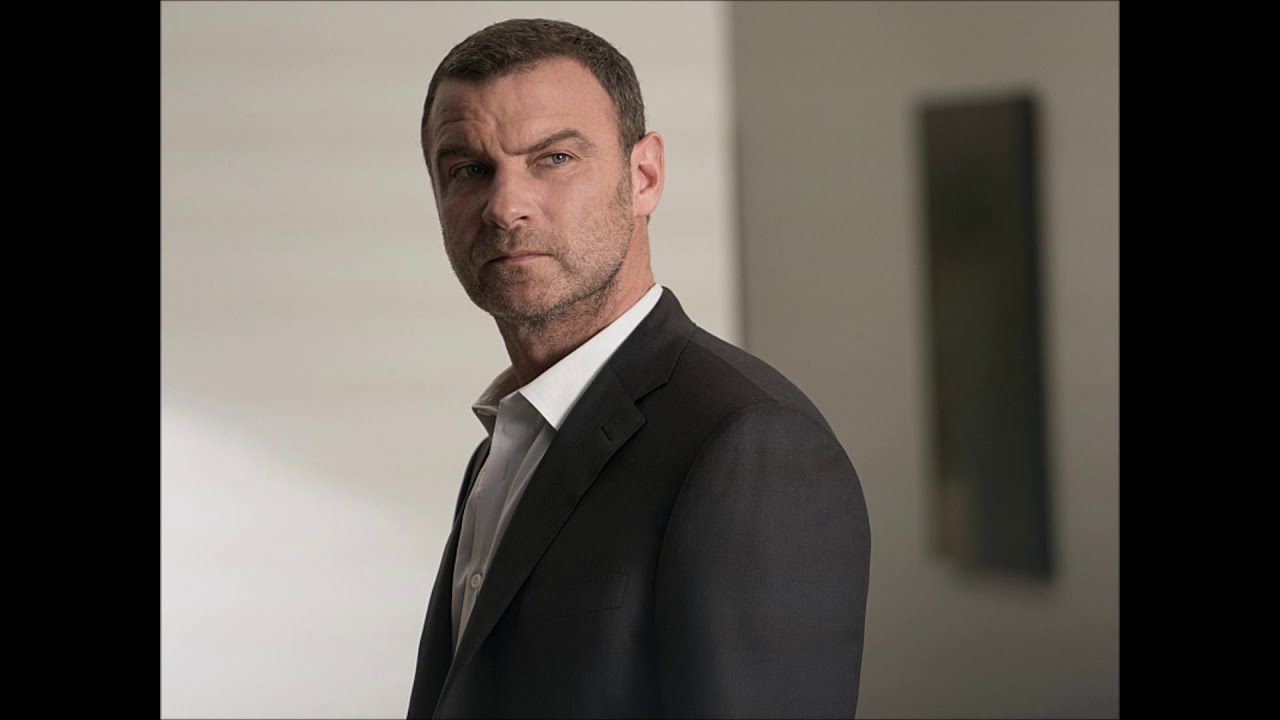 In this episode of Open Door, Robert Downey Jr. (Iron Man, Avengers) and wife Susan Downey turned a converted windmill into a stylish and charming Hamptons home. In this funny, fullaccess house tour, the Downeys show off their favorite art, let you into their closets and explain why their cats have full run of the place.\r
\r
\”We wanted something we haven’t seen a million times,” the Iron Man star says, describing the property itself as well as the decorative ministrations of AD100 designer Joe Nahem and the team at New York City–based FoxNahem Associates. \r
\r
The Downeys originally met Nahem two summers ago, when they rented the heavenly Amagansett country house the designer shares with his partner, Jeffrey Fields. \r
\r
The Downeys said goodbye to Nahem and Fields that summer with a request that the designers alert them to any particularly enticing properties coming onto the market in the Hamptons. Several months later, Nahem found a place that more than fit the bill: a late–19th century windmill folly, originally constructed as a playhouse, that had been transformed into a fullfledged residence by way of structural additions grafted onto the building in the decades following its construction. Among the many attributes of the estate were proximity to the town of East Hampton coupled with the privacy of a secluded location, enchanting gardens conjured by landscape designer Joseph Tyree for the home’s previous owners, and those sublime trees that dot the lawns like masterpieces of sculpture.\r
\r
Nahem didn’t have much time to revel in the triumph of his matchmaking. As soon as his clients acquired the property, they gave their designer a mere six weeks to transform the home into a Downeyrific sanctuary keyed to the couple’s adventurous aesthetic tastes and the comfort of their children, fiveyearold son Exton and threeyearold daughter Avri. (The actor has another son, 24yearold Indio, with his exwife, Deborah Falconer.)\r
\r
Happily, once the holiday season was over, Nahem and his team were able to return to the home and begin the renovation in earnest. One of the biggest changes was the reconfiguration of the living room that lies just beyond the octagonal entry foyer at the base of the windmill. To give the transitional area a greater sense of place, the designer sunk the living room several feet and anchored it with a massive wraparound fireplace wall by ceramic artist Peter Lane. \r
\r
Another major component of the renovation involved rethinking the pool area to suit the Downeys’ vision of easy, breezy outdoor leisure. Rather than making the guesthouse do double duty as a swimming cabana, as it had in the previous scheme, Nahem designed a freestanding poolside pavilion, in collaboration with Alveary Architecture, replete with a dining setup centered on a mosaictopped table by Kelly Behun Studio, an outdoor living room and bar, and a television almost as large as the screens at the local multiplex. \r
\r
As for the interiors of the house itself, the mix represents an amiable consensus among the Downeys and their designer: pedigreed pieces and unpretentious offtherack staples, poppy colors and soothing neutrals, eccentric accents and discreet luxuries. It’s an idiosyncratic assemblage that speaks equally to the actor’s puckish spirit, his wife’s concerns for efficiency and ease, and Nahem’s finesse in crafting eminently livable homes with a touch of otherworldly magic.\r
\r
Read the full story here https://www.architecturaldigest.com/story/robertdowneyjrhamptonshome
Still haven’t subscribed to Architectural Digest on YouTube? ►► http://bit.ly/2zl7s34\r
\r
ABOUT ARCHITECTURAL DIGEST\r
The leading international design authority, Architectural Digest features articles and videos of the best in architecture, style, culture, travel, and shopping.
Inside Robert Downey Jr.’s Windmill Home in the Hamptons | Open Door | Architectural Digest 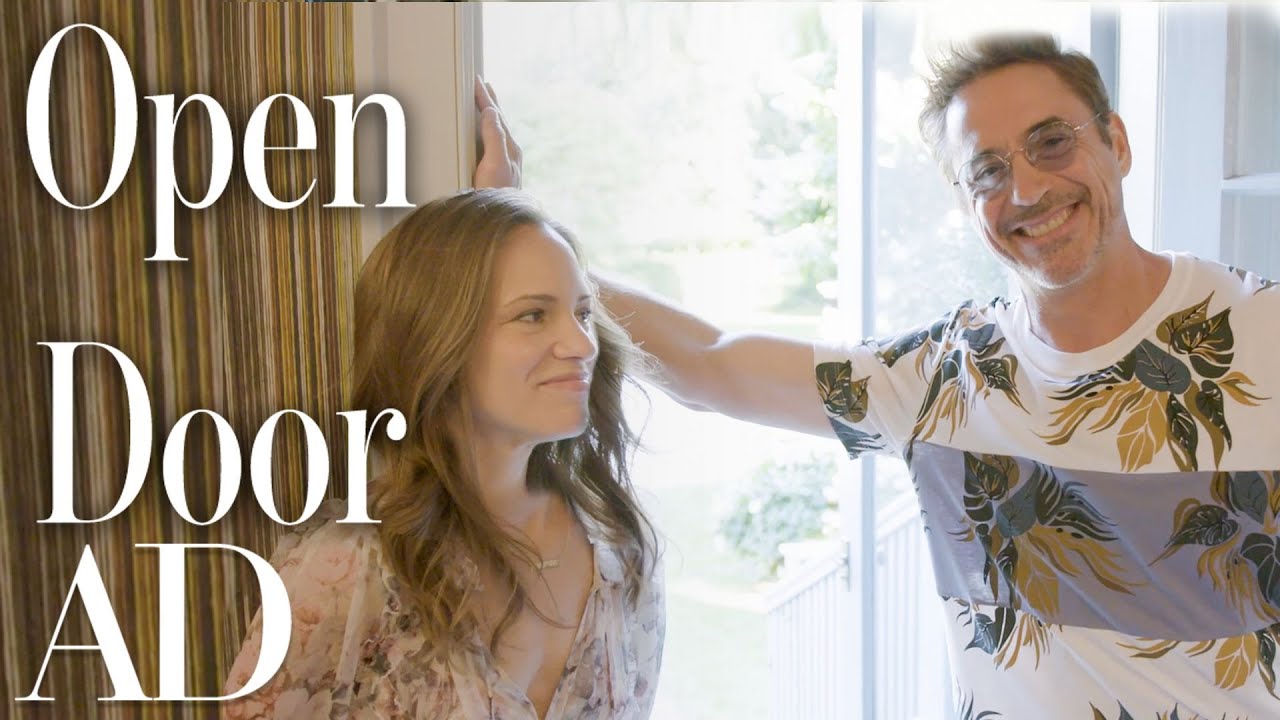 The Tony Awardwinning actor and Ray Donovan star tells V.F. about the time he lived on an ashram, what it’s really like to raise children, and where to find the best pizza in the world.
Still haven’t subscribed to Vanity Fair on YouTube? ►► http://bit.ly/2z6Ya9M\r
\r
ABOUT VANITY FAIR\r
Arts and entertainment, business and media, politics, and world affairs—Vanity Fair’s features and exclusive videos capture the people, places, and ideas that define modern culture.
What Ray Donovan Star Liev Schreiber Learned From Living on an Ashram 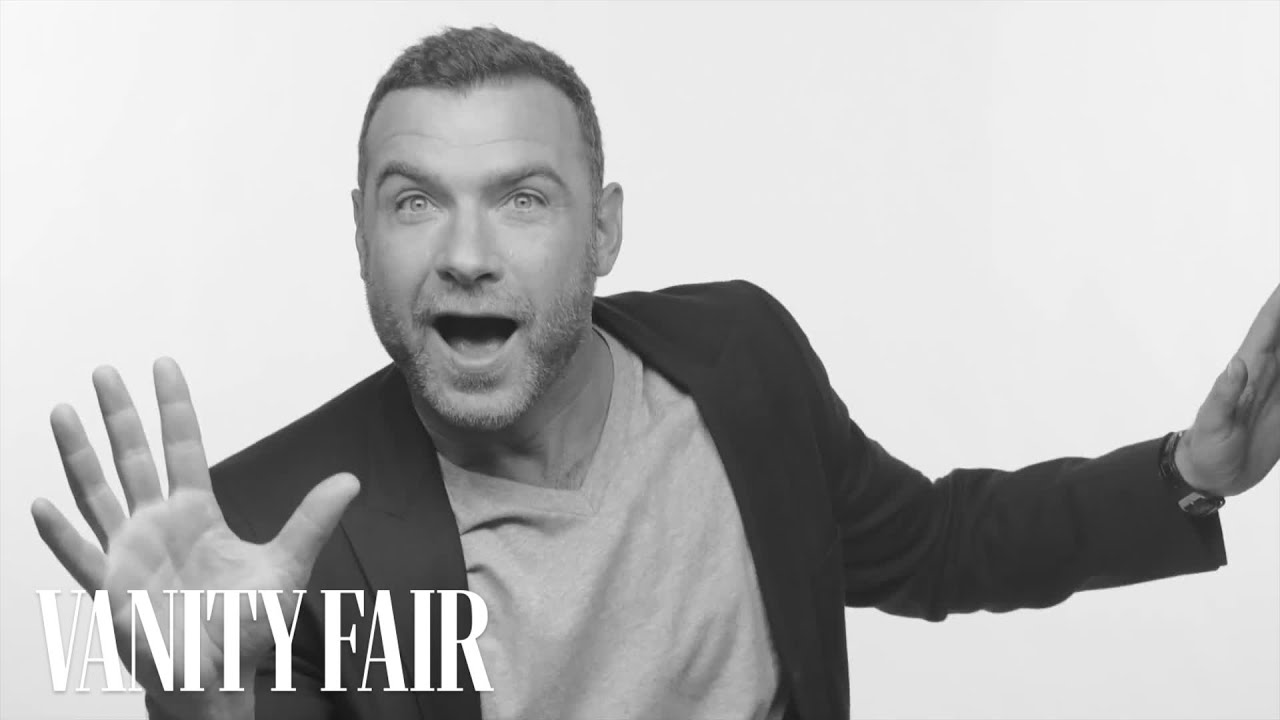 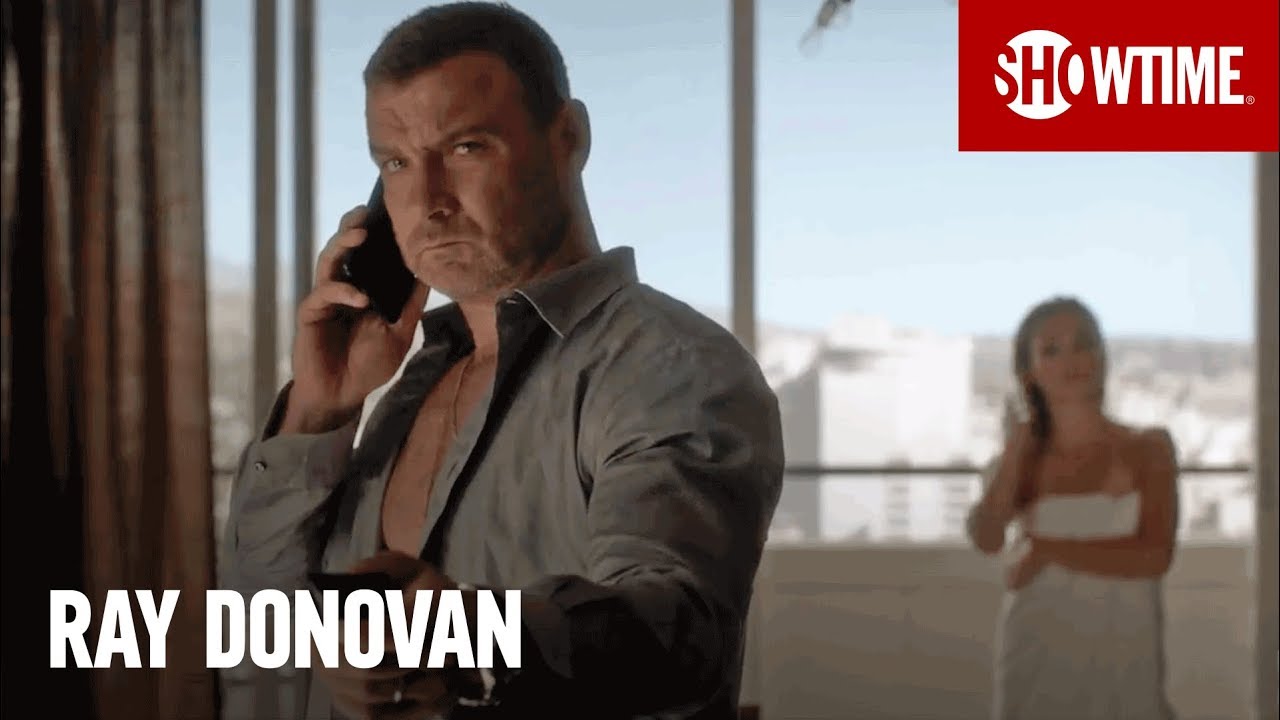