For nearly 20 years, Mark Serbu’s SUPER-SHORTY has been the standard-bearer among the super-compact shotgun set. Built from either a Mossberg 500 or a Remington 870 that started life with a pistol grip, the S-S is considered an “Any Other Weapon” (AOW) under NFA law, meaning a $5 tax stamp instead of $200 as with other NFA items. I’m really not sure if most people buy these just for screwing around and having fun or if it’s for more practical purposes, but I do know that the S-S is capable of filling both roles. . .

First, yet again I need to thank Sharp Shooting Indoor Range & Gun Shop in Spokane, WA for assisting me with a review. Last time it was use of their south bay (with lights out) for the flash hider shootout. This time, thanks to Sharp Shooting’s manufacturer’s license and SOT, Serbu was able to send the SUPER-SHORTY to them for testing and inspection. As long as I remained on Sharp Shooting’s premises under their watch, there was no need to transfer the S-S into my name and wait the ~8 months on the tax stamp. Once again, they were kind enough to give me a little alone time in their south bay for some shooting (gun) and shooting (camera). Thanks again.

If there’s any doubt as to whether the SUPER-SHORTY uses a proprietary barrel or a cut-down factory barrel, the half-missing “2” in the “2 3/4 or 3″” roll mark should provide the answer. The machining here is smooth and clean and the radius on the OD is a nice touch. There is no front bead or other sight on the S-S. My sample is built from a Remington 870 and, if you’re familiar with that shotgun (and you probably are), you’ll be right at home with the S-S. Same safety, same trigger, same action lock at the front of the trigger guard, same loading gate, etc. This 6.5″ barrel version holds just 2 shells in the tube — whether 2.75″ or 3″ — while the 13.75″ barrel flavor holds 4. Where Serbu really comes in and makes functional changes is to the forend and action bars. Gone is the standard, horizontal grip and in its place is a vertical foregrip. 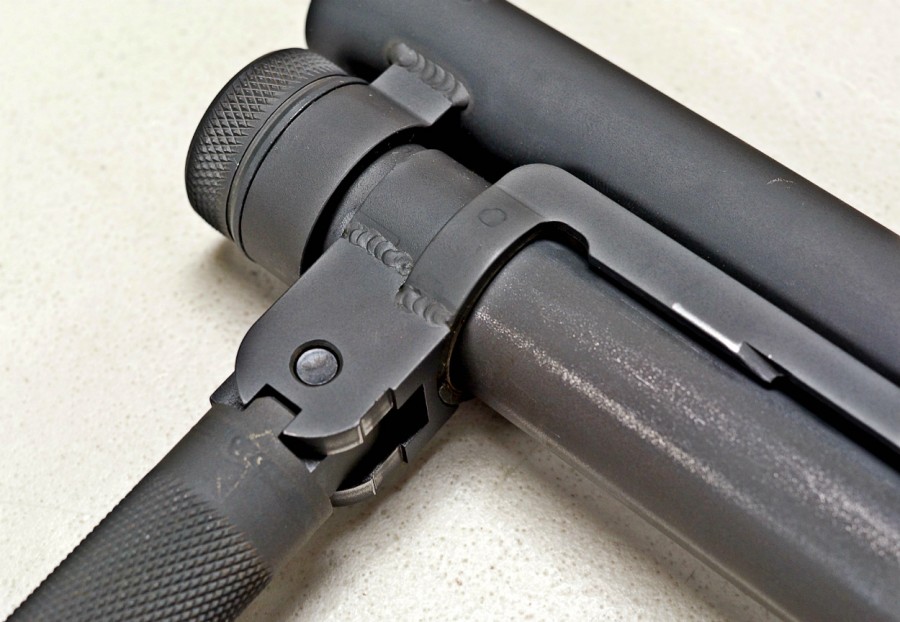 It locks firmly in vertical orientation, held in place by a stiff spring, and pulling down on it allows it to clear the locking notch and fold flat to get it out of the way. It’s possible to run the S-S with the foregrip folded, but it isn’t the design intention and it’ll abrade the bottom of the receiver a bit. Flipping the grip from folded to vertical orientation is simple and rapid, requiring nothing more than rotating it downwards until it clicks. The checkering feels nice; grippy, precise, but comfortable[-ish] even when the recoil is slamming it into your hand. What isn’t so comfortable is the included pistol grip. The plastic is hard and slick, and the shape manages to direct all of the recoil force into the web of your hand and the meaty part of your thumb there. Overall this gun is awesome and a ton of fun to shoot — oh…whoops…spoiler alert! — but the factory grip just sucks. Luckily, there’s no shortage of aftermarket options such as those from Hogue, Knoxx, and others. 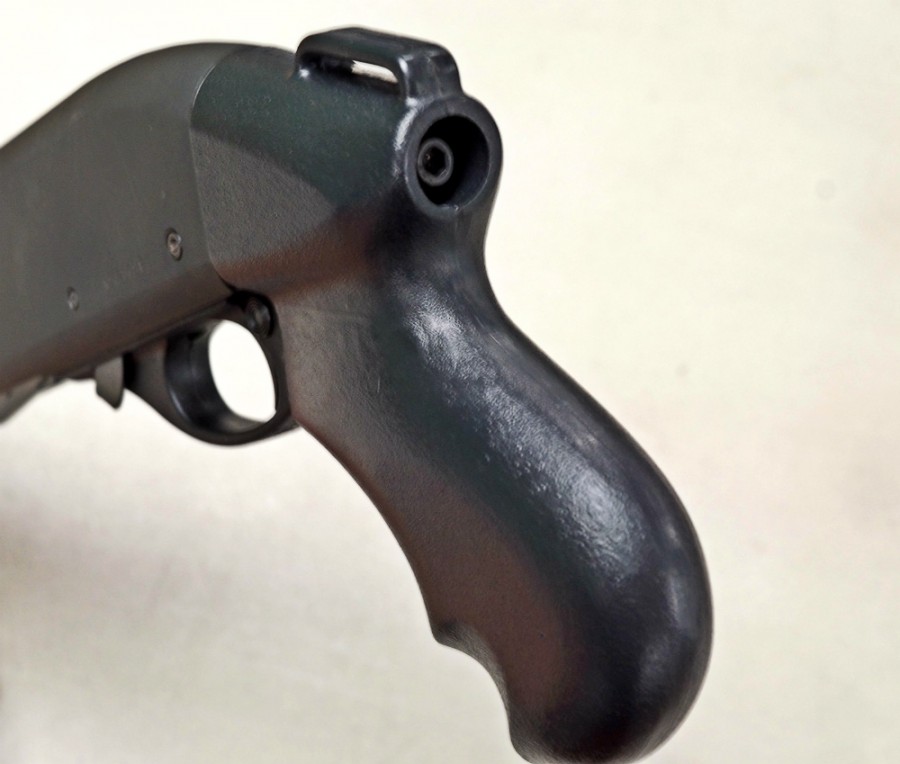 There ain’t a lot of shotguns that’ll fit in a backpack, but the Serbu SUPER-SHORTY will perform the trick with room to spare. Overall length with 6.5″ barrel is only 16.5″. Small size lends to practical applications, as the S-S can bring 12-gauge thump just about anywhere and can easily maneuver inside of tight quarters.

A bit of bear defense in the woods? Sure. The short length and 4.5-lb weight won’t drag you down. Home, office, or vehicle defense? Definitely. The 6.5″ barrel makes for a great shot spread from almost point blank out to 7 yards. At 7 yards, birdshot escaped the sides of the torso silhouette, but not by much. I’d guess 90% of the shot hit that sketchy looking, blocky character above. At 7 yards, max dram #4 buckshot was entirely in the silhouette but for one pellet. At 3 yards, a ~12″-diameter spread was still achieved and all pellets were comfortably inside the lines. Sure, 2+1 rounds may be a little limiting if you’re on Yogi’s pic-a-nic menu, and shooting slugs out of this thing may just hurt more than being mauled by a bear, but overall I still think it’s a practical application for the S-S. And longer-barreled versions do hold more shells. But inside of a small room or hallway, the S-S would be as intimidating and devastating as it is maneuverable.

On the fun front, it’s fun. It’s a blast to shoot in every sense. While the S-S may be only 16.5″ in length, its occasional fireballs have no trouble exceeding that. With the torturous pistol grip, I found the recoil best tamed by my left hand. I locked my elbow and pulled forwards on that vertical foregrip as much as possible. During all of my shooting, my left hand — which is one of my favorites or at least in the top 2 — never really hurt like my right did, but as I write this a full week later it’s the left that’s still noticeably sore.

Birdshot was fine. Especially my reloads, which are pretty light since they’re usually just run through an over/under for sporting clays and introducing new shooters to shotguns. I put 75 rounds of this birdshot through the S-S in one sitting and my hands were still mostly functional.

Much to my surprise, the max dram #4 buckshot from S-S wasn’t so bad, either. I’d actually practice with it. Magnum slugs, on the other hand (the right hand), left me feeling pretty much brutalized. In the immortal words of Yung Humma, they smanged it. Gloves wouldn’t be a bad idea, but a better idea would be reserving the slugs for when your friends ask to shoot the SUPER-SHORTY — and they will! — or generally reserving them for when whatever’s on the other end of the shotgun is worse than the punishment the grip delivers to your hand.

Again, much of this would be alleviated by an aftermarket grip. If you really wanted to you could probably order it with a stock instead, which would make it an SBS ($200 tax). As Sharp Shooting has its FFL-07 as well as SOT, they threw on a Knoxx SpecOps stock for R&D purposes and that definitely turned the S-S into a recoil pussy cat (seen in the video).

Overall the SUPER-SHORTY is a kick to shoot and I had a blast testing it out. It belches fire, bucks like a bronco, and devastates targets with a torso-width spread at close range like nothing else I’ve shot. Plus, as it’s likely the shortest pump shotgun on the market, it may just fit in your briefcase. I put my weight into that foregrip and ran the action like a rented mule, but it looks like it’s there for the long haul. It even ran my reloads with only one shell getting a bit stuck in the chamber at the very end, and I rarely bother to resize the brass (it’s typically only run through the same O/U so it isn’t necessary). Basically, it works like a pump gun should.

Ratings (Out of Five Stars):

Accuracy: * * * * * or zero stars
I have no idea how to rate the S-S for accuracy. On one hand, with its super rapid shot spread it supports what’s usually a myth that you can’t miss with a shotgun. At short distances, it’s Feinstein’s nightmare come true of a gun that can be shot from the hip and put lead on target. On the other hand, it’s going to be useless much past 10-15 yards other than with slugs, and without sights it’s going to be hard to hit with slugs at much range anyway.

Ergonomics: * * *
Not the SUPER-SHORTY’s strong point, thanks only to the pistol grip. Otherwise it’s a short, lightweight 870 with a vertical foregrip and that’s all good by me.

Reliability: * * * *
It hung up only once at the end of the shooting session which I chalk up to non-resized brass on my reloads in addition to a new shooter pulling the trigger. There was an incident of it ejecting the empty shell and the live one on deck, which I think was due to me rolling the gun onto its side too much while cycling the action back. Worth noting, though, as it’s an easy thing to do with such a small, light, pistol-gripped shotgun.

Customization: * * * *
Grips will be the popular replacement item, and there are plenty of options out there. A sling is an obvious choice as well. Many aftermarket parts like upgrades for trigger, safety selector, loading gate, extractor, side saddles, etc will work on the S-S. A side saddle that includes a top rail would allow for a laser, reflex sight, or other optic…just don’t let it recoil into your face.

Overall: * * * *
More fun than a barrel of monkeys — even if they bite your hands a bit — and a real head-turner at the range. A fire-breathing, midget dragon that just might have some practical purpose as well. 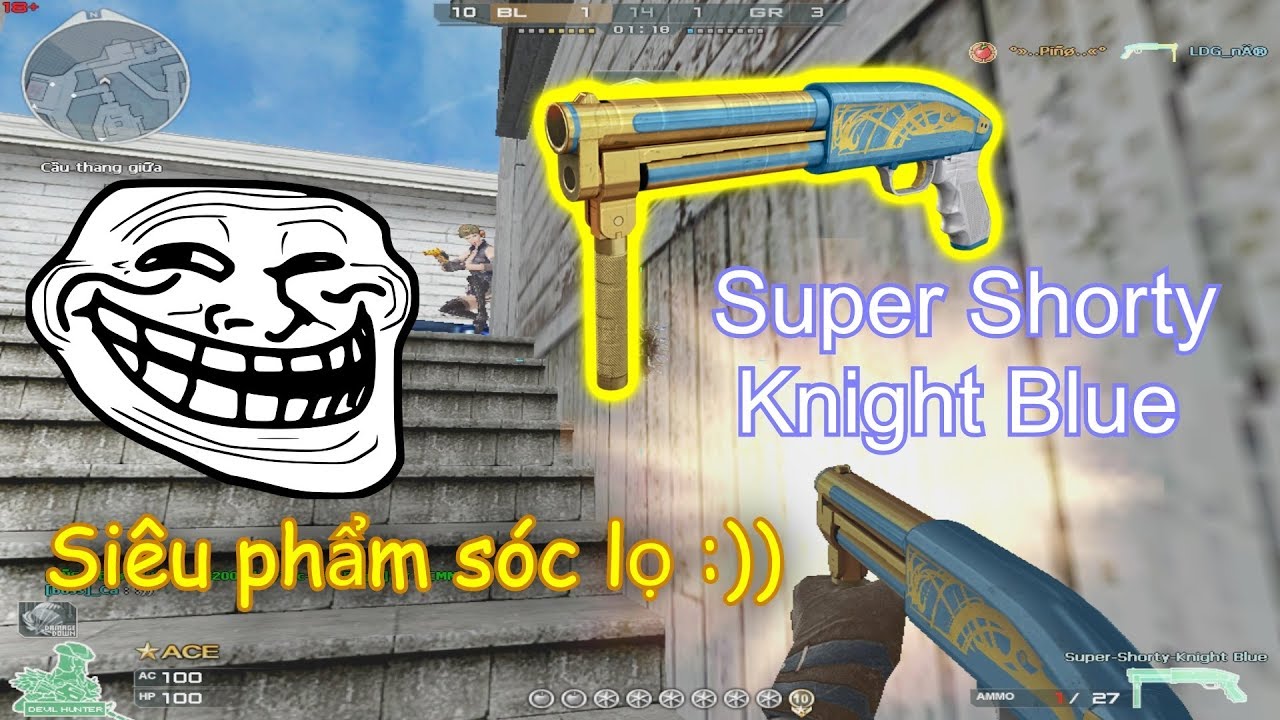 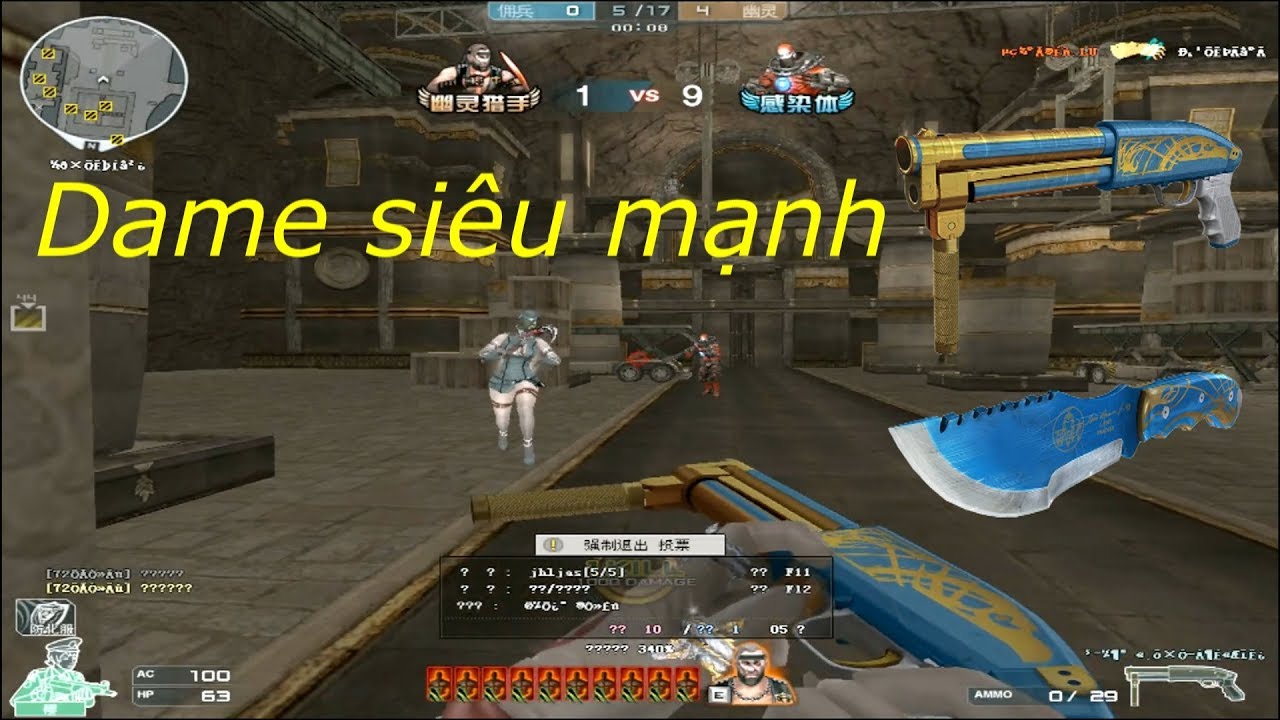 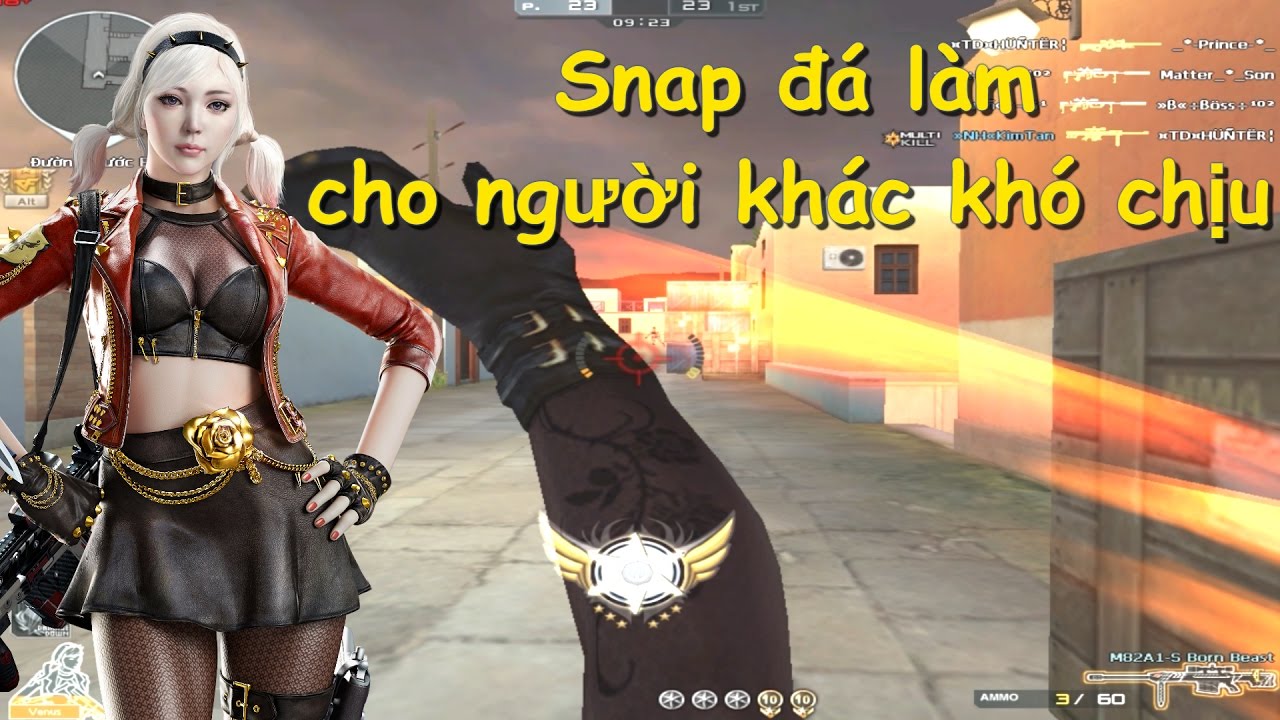 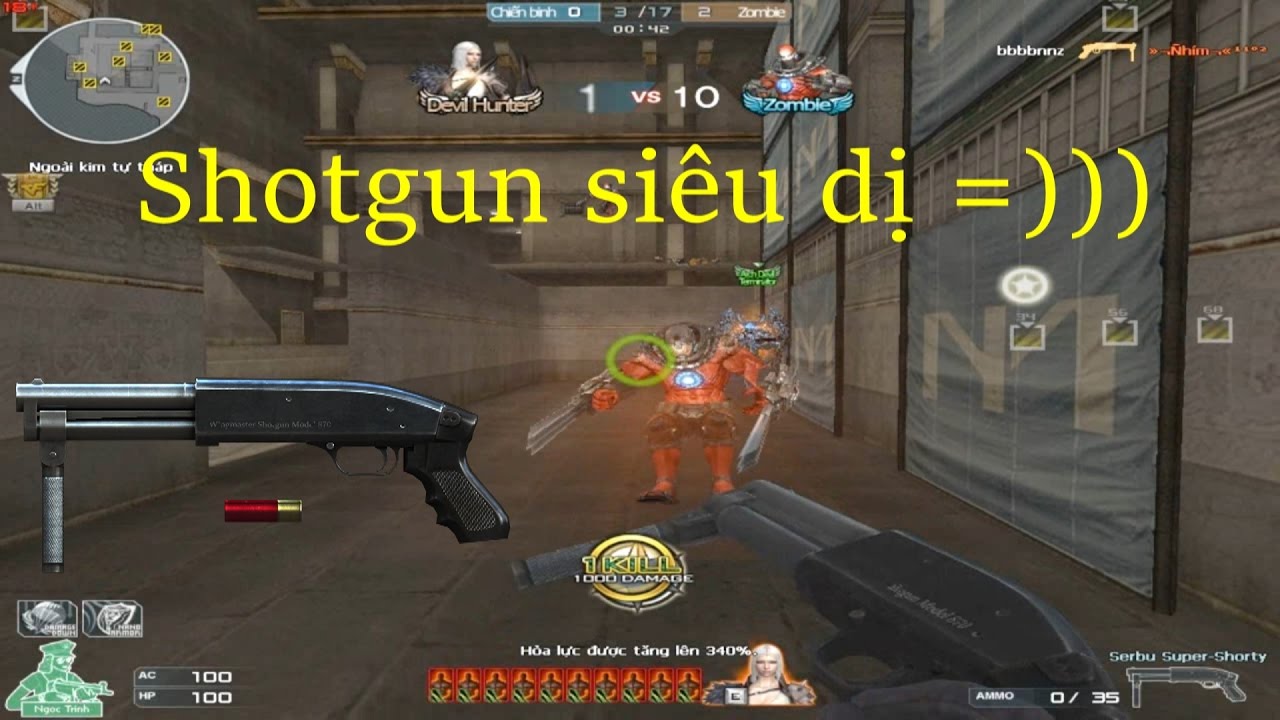 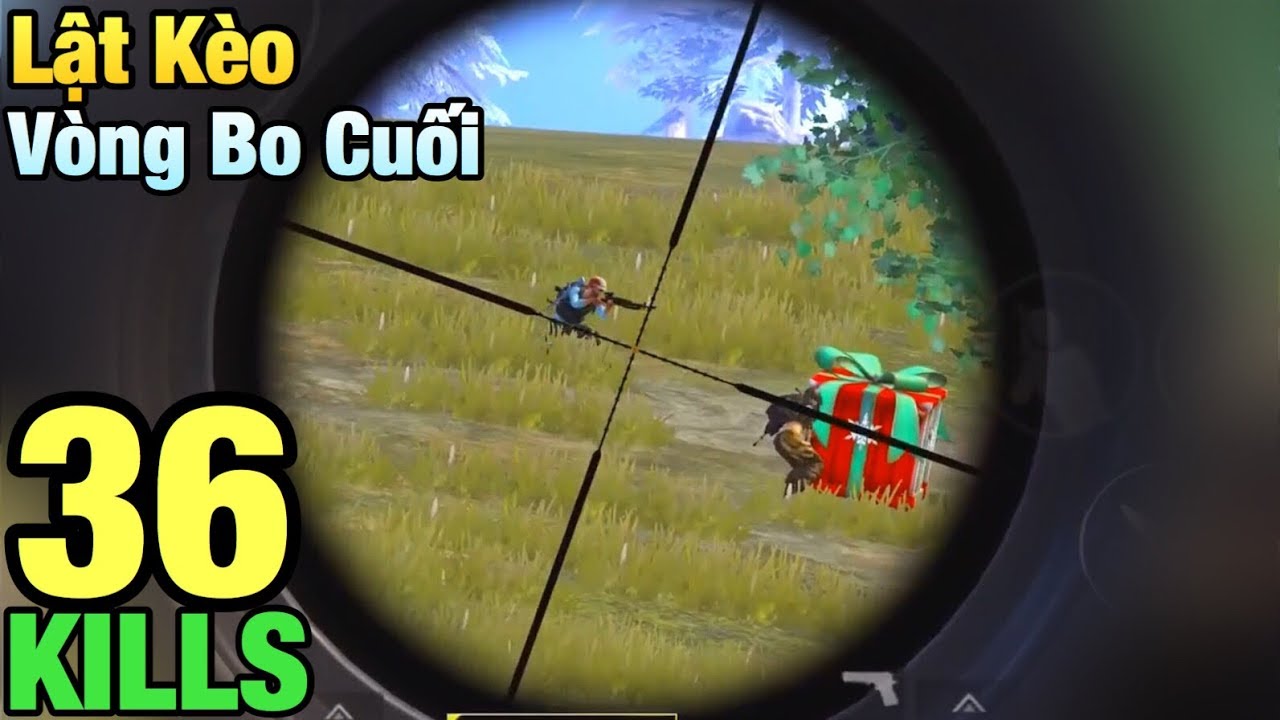